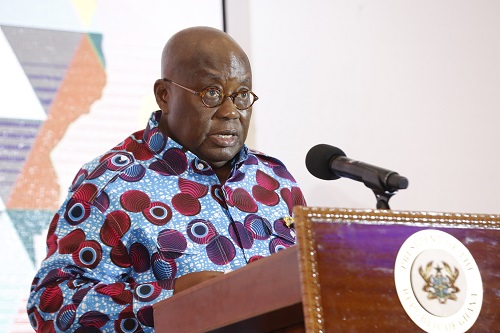 President Nana Addo Dankwa Akufo-Addo has urged the new governing board of the State Interest and Governance Authority (SIGA) to streamline the activities and practices of State-Owned Enterprises (SoE’s) to make them profitable to the nation.

He said the Board should not be bound by the old ways of its predecessors but help develop a new culture of accountability to enable State-owned enterprises, Joint Venture Companies and other state entities give value to the country.

The President made the call when he inaugurated the nine-member SIGA Governing Board at the Jubilee House.

Chaired by Mr Terrence Darko, the Board includes Mr Stephen Asamoah Boateng, Director General of SIGA, Kow Essuman, Representative from the Office of the President, David Collison, a representative nominated by the Ministry of Finance, and Franklin Owusu Asafo Adjei, a representative of the Institute of Chartered Accountants Ghana.

The others are Felix Intrakwah, a representative of the Ghana Bar Association, and three persons nominated by President Akufo-Addo, including Elikem Kunyehia, Miss Yasmin Baba, and Dr. Margaret Duah Atuahene.

The President launched SIGA on August 19, 2019. SIGA which assumed the role of the State Enterprises Commission (SEC) and the Divestiture Implementation Committee (DIC), would ensure the efficiency and financial viability of SOE’s and help them deliver on their mandate. All the assets and liabilities of the defunct SEC and the DIC had been transferred to the SIGA.

President Akufo-Addo told the board members “SIGA is a new institution and my expectation is that that you would help develop a new culture and should not be bound by the old culture and practices of the its predecessors.”

“It is a general agreement that these old institutions did not work in the interest of our people and our country and that is the reason why a new authority has been brought into being.

Felix Intrakwah who spoke for the board assured that the body would live up to the challenge of the task given them and would work to ensure the desired change.

The Board will be under the direct supervision of the Office of the President.