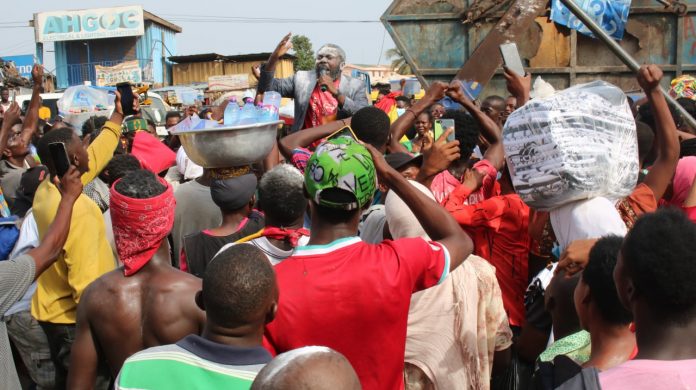 A spontaneous jubilation greeted the arrival of a Convener of the #FixTheCountry Movement, Oliver Barker-Vormawor at Ashaiman from the Tema High Court on Thursday following the successful execution of his bail bond more than 24-hours after he was granted bail by the court.

Mr. Barker-Vormawor was held in police custody for over a month on a charge of treason felony in connection with alleged social media posts over the government’s efforts to impose a levy on electronic transactions.

In an alleged Facebook post, Mr. Barker-Vormawor was said to have indicated, “If this e-levy is passed, I will do the coup myself,” a comment, the state deemed to be a first-degree felony, leading to his arrest on February 11, 2022, at the Kotoka International Airport (KIA) when he arrived in the country for an engagement with the diplomatic community.

Lawyers for Mr. Barker-Vormawor during the period filed processes at the High Court and the Supreme Court in attempts to get the police to put him before a court of competent jurisdiction having been remanded by the Ashaiman District Court.

His legal team led by Mr. Akoto Ampaw and Dr. Justice Srem-Sai considered his detention as a violation of his right to liberty.

Bail
The Tema High Court on Wednesday, March 16, 2022, upheld his bail application by dismissing the Attorney General’s opposition that Mr. Barker-Vormawor had no fixed place of abode and was a flight risk, and may not present himself for trial.

While his lawyers had argued that the evidence presented by the state did not support the facts, the state prosecutors said they had enough evidence to support the charges against Mr. Barker-Vormawor.

A Senior State Attorney, Ms. Hilda Craig also argued that although Mr. Barker-Vormawor’s passport was in the possession of the police, there was no guarantee that he would present himself for trial, arguing that people use unapproved routes to travel out of the country all the time.

“My Lord, we are all in this country and we know what happens, we know a lot of people have passports, yet they use unapproved routes to travel and so it is not an issue that the fact that the police have custody of Mr. Barker-Vormawor’s passport, he will not leave the jurisdiction especially when he is a Ph.D. student at the Cambridge University and considering the level of the offense and the punishment that could go with it,” Ms. Craig told the court.

Fanfare
Some members of the movement who had persistently picketed at the Ashaiman Police Station where Mr. Barker-Vormawor was held, however in the afternoon of Thursday turned the frontage of the station into a fun park drumming and dancing.

Mounting giant speakers on a moving truck that played patriotic songs, the group displayed placards indicating the release of their outspoken Convener.

There was also a standby brass band that played interchangeably with members of the group some of who wore white T-shirts with inscriptions of the group and dancing their hearts out.

Traders, residents and commuters within the Ashaiman municipality were not left out as they intermittently joined the fun, forming a huge crowd at the area which went to worsen the traffic situation along the main streets leading to the main lorry park in the municipality.

And when Mr. Barker-Vormawor arrived at the premises in the company of some members of his legal team, spontaneous jubilation greeted his arrival amidst the pouring of white powder on him to signify his release while being carried shoulder high.

The group chanted and sang, the national youth anthem, “Arise Ghana Youth for your country”, an anthem that has become synonymous with Mr. Barker-Vormawor throughout his month-long detention.

The group subsequently took him ‘hostage’ and paraded him through the principal streets of Ashaiman while commercial drivers, regular commuters and onlookers cheered him.

Mr. Barker-Vormawor who seemed to have been overwhelmed by the crowd was heard chanting, “People,” to which the crowd responded, “Power” amidst jubilation.

Declaring that the Movement would make Ashaiman its headquarters, Mr. Barker-Vormawor expressed disgust at what he said was the constant association of the community to social vices.

Citing the recent case of the Police Service linking Ashaiman to the Borteyman community in the Tema West Municipality where two policemen were allegedly killed when they were said to have led the police to arrest suspects in multiple bullion van robberies, Mr. Barker-Vormawor vowed to work with residents to change the narrative.

He expressed profound appreciation to the Movement for keeping faith with him while he was in detention.