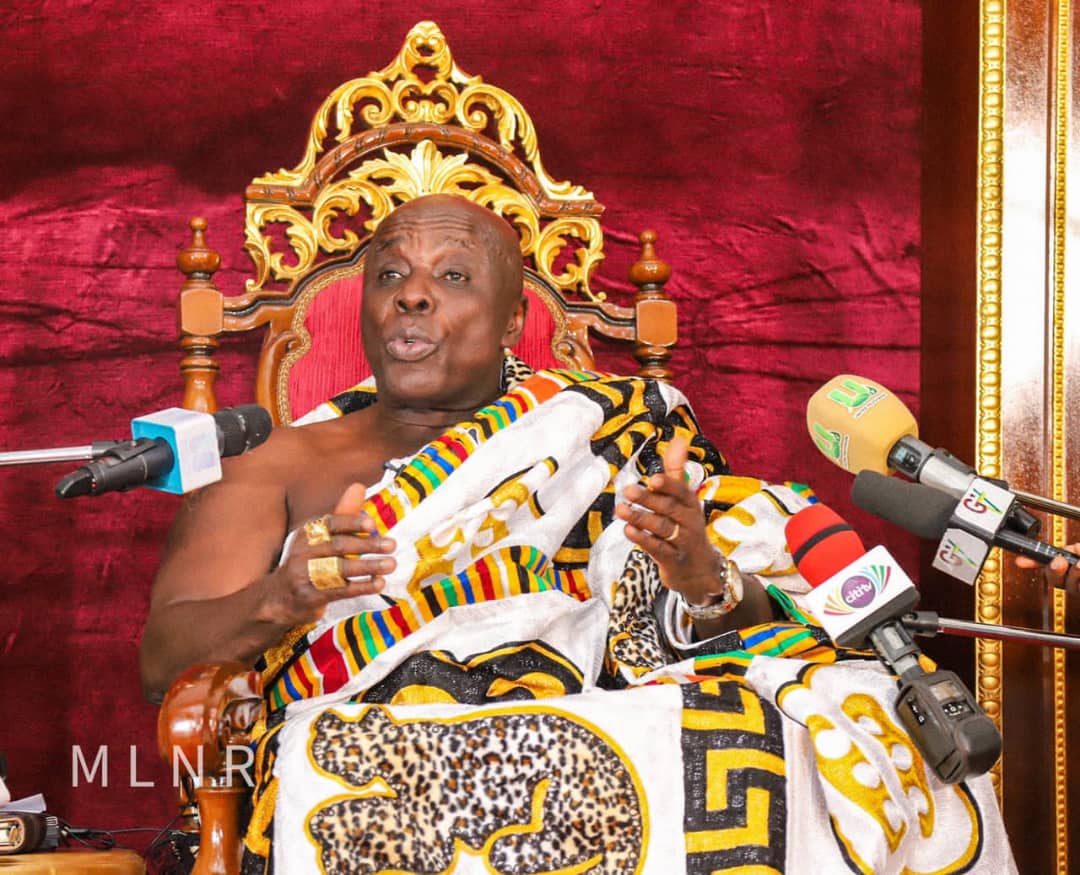 “Be Cautious Of Approaches Towards Forest Preservation”- Okyehene To Gov’t

According to him, “Ghanaians cannot plant trees today for galamsey to take place tomorrow,” hence he cautioned leadership to preserve the forests for future generations.

Okyehene also called on his subject and the entire Ghanaian populace to support the government’s flagship afforestation program; Green Ghana Day which seeks to plant 20 million trees on June 10, 2022.

“Green Ghana sustains our future, I, therefore, urge all citizens to get hold of the seedlings, wherever they are made available, plant them and watch them grow. No one is going to get rich doing this but is it a service that will enhance our living and our environment so plant a tree today and watch it grow”

The Okyehene said this when a delegation from the Ministry of Lands and Natural Resources led by the Chief Executive Officer of the Forestry Commission, Mr. John Allotey called on him on Monday, 23rd May 2022 at the Kyebi Palace in the Eastern Region of Ghana.

The King said he is delighted the government has seen the need to plant trees as they are regulators of temperatures everywhere around the world which keeps us alive.

He added that the world is united ecologically and therefore when we harm the ecological system, we harm ourselves. He also cautioned against the cutting down of trees as he said it is a selfish act. ” it is very selfish to cut trees or destroy any part of the ecological system, we need to take care of these trees for the generation to come. We must be selfless and generational thinkers”

Osagyefuo Amoatia encouraged his Citizens to lead the charge in the Eastern Region and support the initiative saying “you are not doing this for the President, or for me but for yourselves and your generation. Also, you are not only planting trees, you are planting your future”

He was pleased that the Traditional leadership is being involved in such an initiative but also asked that they be made an integral part of negotiations, from acquiring seedlings to planting them.

Mr. John Allotey, CEO of the Forestry Commission who led the delegation on his part, praised Okyehene Osagyefuo Amoatia Ofori Panin II for his exemplary leadership in the area of Environmental Protection and Sustainability in Ghana and the world at large.

Mr. Allotey in his submission informed the King about the Ministry’s two-fold Strategy for the 2022 Green Ghana Day saying, “we have two prompt strategies that are to plant 10 million trees in the forest reserves and 10 million in other places like we did last year. Sighting households, medians, waterbodies and schools among others as examples.

He applauded the King’s efforts and participation while highlighting his role in last year’s edition of the Green Ghana campaign saying “with your leadership and support, last year during Green Ghana, the Eastern Region exceeded its target of 500, 000 thousand trees as we planted 700, 000 trees and we’re grateful”

Mr. Allotey again applauded the Okyenhene Osagyefuo Amoatia Ofori Panin for taking charge in Ghana’s effort to reafforest the country, through the Okyeman Environment Foundation which has begun a tree planting exercise to plant 25 million trees across all towns and villages within the Akyem Abuakwa Traditional area in a duration of 5 years.