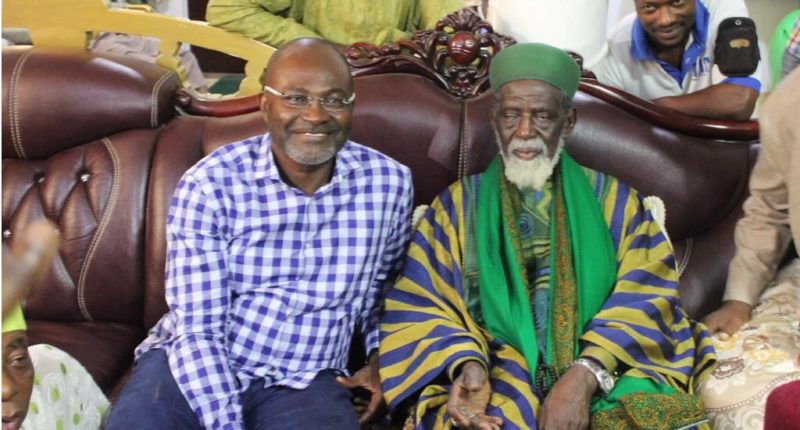 The Member of Parliament for the Assin Central Constituency in the Central Region, Kennedy Agyapong has strongly recommended the Chief Iman of the Republic of Ghana, Shiekh Nuru Osman Sharabutu, to be awarded the Nobel Peace Prize for his efforts at bridging the religious divide especially between Christians and Muslims which threatens peace across the globe.

Kennedy Agyapong made this pronouncement when he paid homage to the affable Muslim Cleric during a courtesy call on the Chief Imam at his residence at New Fadama near Darkuman in Accra to mark the imminent end of the Muslim fasting period of Ramadan.

The oracular MP, who is also the Chairman of Kencity Media Ltd, was of the view that, the singular effort of the venerable and highly respected cleric, who recently visited the Christ The King Parish to worship with Catholics when he celebrated his 100 years birthday, attracted the world’s attention for that exemplary action on his birthday. This action Kennedy Agyapong said, needed to be applauded and recognised due to the calming influence of the interfaith visit, stressing that the feat was unprecedented and a milestone for religious bodies in Ghana.

Kennedy Agyapong known in Muslim circles as Sheikh
Osman also used  the occasion to donate
some items to the Muslim community at New Fadama and its environs, calling on
adherents of the Islamic faith to embrace peace and live in unity.

On his part, the Chief Imam, Sheikh Nuhu Osman Sharabutu expressed his heartfelt appreciation to the MP and prayed for his well being and Allah’s guidance in the days ahead.

In a related development, over 30 towns and suburbs
in the Greater Accra, Central and the Eastern regions have benefited from
Kennedy Agyapong’s Ramadan outreach this year.

In what has become a yearly ritual, Kennedy Agyapong has made considerable donations to over 30 Muslim communities including those in Madina, Ashaiman, Mamobi, Adenta, Nima, Adabraka, Alajo in the Greater Accra Region and Aburi in the Eastern Region and Awutu Senya in the Central Region.

This took place at the Forecourt of Kencity Media Ltd, at Zongo Junction, Madina.

Flanked by his wife and the CEO of Kencity Media Ltd, Mrs. Stella Wilson Agyapong, the Assin Central MP reiterated his desire to fete the Muslim community at the end of Islamic fasting period.

He bemoaned the situation where some of the members
of the Muslim communities are denied some of the items donated over the years
and pledged that this year, he would ensure a fair and equitable distribution
of the items.

Ramadan is considered the holiest month of the year for
Muslims. During Ramadan, Muslims fast from food and drink during the sunlit
hours as a means of self-control, gratitude, and compassion for those less
fortunate. Ramadan according to Muslims, is a month of intense spiritual
rejuvenation with a heightened focus on devotion, during which Muslims spend
extra time reading the Qur’an and performing special prayers.