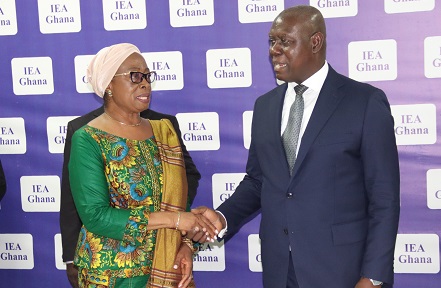 The Chief Justice, Justice Kwasi Anin Yeboah, and his predecessor, Sophia Akuffo, have kicked against calls to cap the number of judges at the Supreme Court (SC).

In their view, the scope of the SC under the 1992 Constitution was too broad, making the apex court inundated with a workload of cases which made it impossible to limit the total number of judges there.

The two shared their thoughts on whether or not to cap the number of judges appointed to the SC at the Institute of Economic Affairs (IEA) stakeholder engagement on constitutional review in Accra last Tuesday.

They argued that the number of judges at the SC could only be capped if access to the court was limited.

The latest engagement was on the topic: “Reviewing Ghana’s 1992 Constitution: The Judiciary and the Constitution”.

Article 128(1) of the 1992 Constitution provides for not less than nine judges, other than the Chief Justice, on the SC but places no limit on the number the court should have.

But in the recent history of the court, it has had a maximum of 15 justices.

Additionally, Article 131(1)(a) of the Constitution makes it binding on the SC to hear matters, whether civil or criminal, emanating from the High Court to be heard on a second appeal as of right.

Many legal luminaries have, over the past years, espoused contrasting views on the capping of the number of justices at the SC.

In 2019, Justice Gertrude Torkornoo, who was then being vetted for the SC, said it would be disastrous to cap the number of judges at the SC since the Constitution had given the apex court a broad scope and there was the need to put as many judges as possible there to do the work.

In 2020, while Justice Clemence Jackson Honyenuga was also being vetted for the SC, he proposed that judges at the court be capped at 17 to ensure expeditious adjudication of cases, while Justice Kulendi was of the view that there must be an open ceiling of SC judges, on the grounds that the Constitution must be allowed structural flexibility and be forward-looking to enable it to respond to future needs of the people.

Prof. Oquaye has also called for a national conversation on whether the appointment of judges to the SC should be capped.

Taking her turn as the main speaker at the forum, former Chief Justice Akuffo explained that the scope of the SC was too broad and that there had to be a limitation to access to the court.

Using Kenya as a case study, she said the majority of the cases in that country ended at the Court of Appeal, which had more judges, and that only constitutional matters and matters of critical and public importance were entertained at the SC, unlike in Ghana.

She said once cases at Kenya’s Appellate Court had been decided, they could not be referred to the SC for interpretation, adding that that was not the case in Ghana.

“This open door to the SC leads to unnecessary caseloads and it slows down the pace of cases, making it difficult to say cap the number of judges at the SC.

“I do not think capping is necessary because the scope of the jurisdiction of the SC is too broad and we need to take a look at it.

“I am not in a position to say the Constitution should now cap the number, but if you want to cap, then we need to also reduce access to the SC, and then we will have something that will be quality-based rather than quantity-based,” she said.

Reacting to the submissions made by his predecessor, Justice Anin Yeboah recounted his visit to the United States (US), where the SC had the option to choose which appeals to hear out of the total number of cases before it.

He said that was not the case in Ghana, explaining: “They are thinking of cases like the rise of Guantanamo Bay precedence, not your personal injury resulting from an accident on the highway which can go through the hierarchy of the superior courts in Ghana, and the SC judge has no objection but hear it because he is bound by law.

“But there (US), where it all started, it is not like that at all; you cannot compel the SC there to hear those sorts of cases.

“However, in Ghana, what the Constitution says is that some of these cases which commence from the High Court must be heard on the second appeal as of right. And who are you to say ‘no’?” he asked rhetorically.

That, he said, explained why the SC had more work than it could do.

“So when people start talking about capping the number of judges at the SC, with all apologies, some of them may not know the nature of the jurisdiction of the court, and it is a cause for worry. They must take their time to ask and they will be told,” Justice Anin Yeboah said.

Touching on Article 144(1) of the Constitution, which states that the Chief Justice shall be appointed by the President, acting in consultation with the Council of State and with the approval of Parliament, the former Chief Justice said the modalities leading to the President’s appointment were not transparent enough.

“When it comes to appointment, there is too much unnecessary public questioning and I think the process matters and must not be left to guesswork and personal proclivities,” she said.

She called for an instrumental process which was more open and transparent to guarantee the ends and goals of the Constitution.

She further called for the establishment of an independent Judicial Service Commission, which will be independent of within and without, to make inputs into the appointment of justices to the SC, as done in some jurisdictions on the continent.

Touching on the undue vilification of some justices of the Superior courts, Mr Okudzeto said the media had a role to play, adding: “The media are so ill-equipped to deal with intricate cases.”

He called on media outlets to educate their own members to be specialists on the court beat.

Mrs Mensa, who was given an opportunity to also share her thoughts, charged the public to learn beyond what they heard from politicians to avoid bringing the name of the judicial arm of government into disrepute.