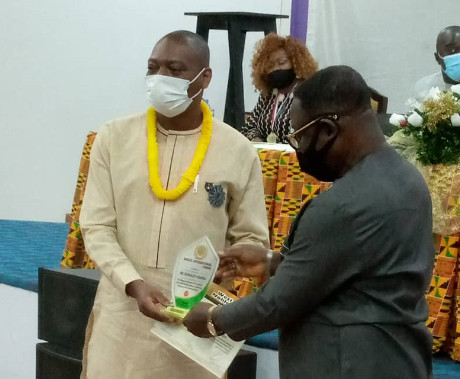 The Executive Secretary (ES) of the National Accreditation Board (NAB), Dr. Kingsley Nyarko by virtue of his immense accomplishments in various fields of endeavor was nominated as a recipient of a prestigious Noble International Award after the Governing Council of WANF resolved to honor him and a few West Africans for their noble virtues and recognizable contributions toward the development of the West African sub-region during the Organization’s 30th Conference and Awards 2020.

In a citation read at the function, Dr. Kingsley Nyarko was lauded for his bold and courageous initiatives taken at his various fields of endeavor, and also for being an eminent West African who upholds the virtues of Honesty, Integrity and Accountability.

The event came off on Friday 17th July, 2020 at the Chartered Institute of Bankers Conference Hall, East Legon, Accra.

Dr. Kingsley Nyarko, who is also the governing New Patriotic Party’s Parliamentary Candidate (PC) of Kwadaso Constituency for the 2020 general election was appointed the boss of NAB in July 2018. Under him as the head of the institution, he together with the Board have chalked some remarkable achievements including the automation of the Evaluation and Credential unit to facilitate an easy evaluation of a person’s academic credentials; review of NAB’s 2014-2018 Strategic Plan and draft and launch of its 2019-2023 Strategic Plan; commissioning of an Information Resource Centre to aid research; deepening the sensitization of the public with regards to the mandate of NAB through massive media engagements; presentation of Presidential Charters to two private university colleges namely Pentecost University and All Nations University on a same day, and others.

Before his appointment as the Executive Secretary of NAB, he was the Executive Director of Danquah Institute (DI); a policy and research Centre, a position he held for one (1) year after his appointment in July, 2017. Under his rein, he helped deepen the promotion of individual freedom, rule of law, multi-party democracy, liberal economies and equality of opportunity through research, advocacy, publication and other novel policy approaches.

Dr. Kingsley Nyarko was also a Senior Lecturer and Head of Department of the School of Education and Leadership, University of Ghana, an External Examiner of the Department of Educational Foundations, University of Cape Coast (UCC) and a former visiting lecturer of Ghana Institute of Management and Public Administration (GIMPA). He has published several scientific papers in both local and international peer-reviewed journals which eventually led to one of his numerous awards as the best researcher at the School of Social Sciences, University of Ghana in the 2014/2015 academic year.

Dr. Kingsley Nyarko, in addition, was the founding member of the Pan African Psychological Union (PAPU). He was also very instrumental in the revival of Ghana Psychological Association (GPA) in 2011, and chaired the Association’s conference organizing committee. He was also the Public Relation Officer (PRO) of GPA.

Around January, 2020, Dr. Kingsley Nyarko was honored at the 2020 African Quality Awards for his exhibition of profound dynamism and unflinching commitment toward the promotion of tertiary education in Ghana.

In a speech delivered by the Executive Director of WANF, Dr. Dee Otibu Asare remarked that the Organisation has been preaching integrity across the ECOWAS sub-region since its inception in 2003. He continued that it is the hope of WANF to build an army of honest people, Eagles in business, politics and government across the sub-region through recognition of men and women of integrity and nobility. “In the context of WANF, a noble is a person with fine personal qualities such as courage, humility, servant leader and cares for others, while integrity means high moral excellence, honesty and sincerity”, he noted.

Apart from Dr. Kingsley Nyarko, twelve (12) other personalities were also honored on the day for their high personal, financial and moral integrity, and also, for their contributions toward the advancement of their respective countries.

WANF held its maiden edition of the eminent West Africans Forum in 2003 and has subsequently been organizing programs across the ECOWAS sub-region. It has a membership of over three thousand (3,000). The forum is a non-governmental, non-religious and non-profit making organisation with its headquarters in Accra, Ghana.

With the objective of WANF to pool together prominent virtuous West Africans of eminent achievements, promote probity and accountability among the leaderships of West African states, promote socio-economic integration of the West African sub-region through businesses and social activities, and others, the organization periodically organizes symposiums, conferences, exhibitions and annual awards.