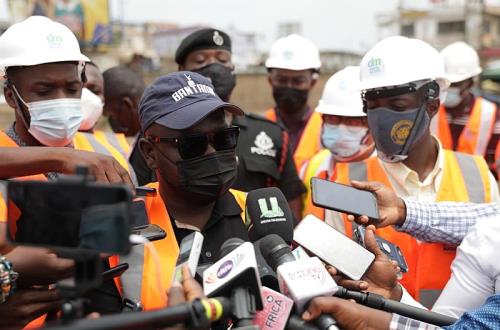 The Minister for Works and Housing, Francis Asenso Boakye has expressed satisfaction with dredging works done at the Odaw river and Korle-lagoon as he says government is committed to ending flooding.

The Minister who was on an official tour of ongoing works by his Ministry in Accra on Tuesday also disclosed that he is touring flood prone areas to ascertain the level of works done by Dredging masters.

In that regard, he commended Dredging masters for the quality works executed so far adding that the dredging would help prevent any flood disaster.

Mr Asenso Boakye also reiterated government’s commitment towards resolving the issue of perennial flooding disclosing that government has spent about gh230million on the prevention of flooding in the country.

The Operation’s Manager for the Dredging Masters, Sena Kofi Adiepena also assured the government and Ghanaians of their commitment towards dredging the entire drains as he says, they believe after their work is done, there won’t be any major disaster after any heavy rain downpour.