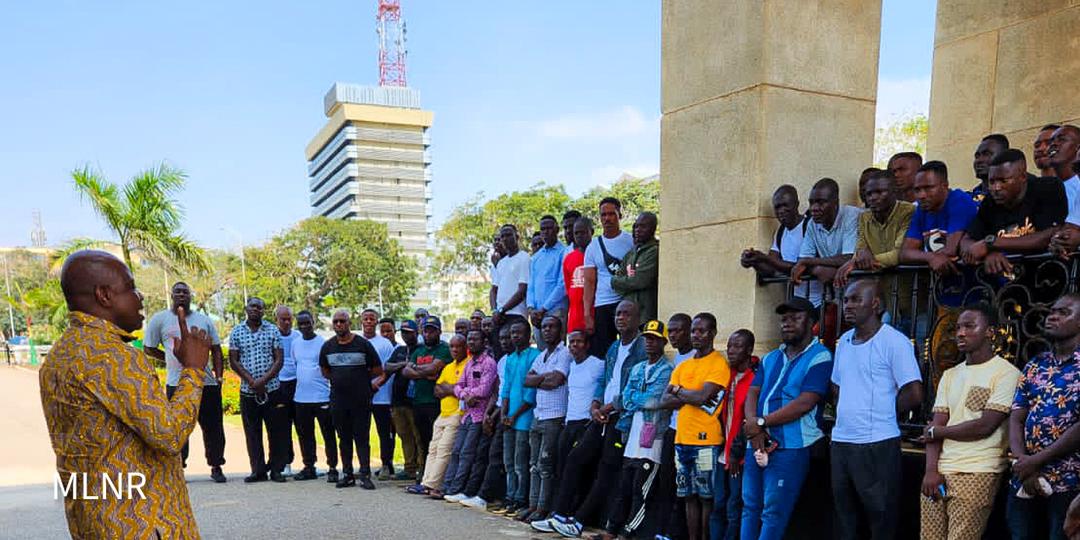 One Hundred persons, drawn from various parts of the country have begun a one-month training as part of efforts to protect Ghana’s river bodies from the activities of illegal miners.

The One Hundred (100) guards which comprise Ninety-Seven Males and three Females were handed over officially to the Eastern Naval Command by the Deputy Chief Executive Officer of the Minerals Commission on Friday, September 23, 2022, to undergo the training.

He explained that by the end of the month-long training, the river guards will be equipped with skills in speedboat operation, and swimming, among others.

He charged the trainees to treat the drills with the seriousness it deserves so as to implement them effectively when they pass out.

Commodore Emmanuel Ayesu Kwafo disclosed that the Ghana Navy is setting up a Rivery Command that will work with the river guards to clamp down on galamsey activities on river bodies.

“The Ghana Navy itself is forming a rivery command so that after this training, we will support you to fight galamsey operations. For the next month, we are going to give you some basic and essential skills that you’ll need out there”.

“Swimming is one of the skills we will give you. We will show you what to do when the water is deep and how to deal with mining pits. We will teach how to detect the place and how to give reports and feedback”, he said.

Speaking on behalf of the Sector Minister, the Deputy CEO of the Minerals Commission in charge of operations, Mr. Samuel Tika said the training forms part of the government’s multi-faceted approach to the fight against illegal mining.

“They have been specially selected to be trained to work on the areas of our country affected by galamsey activities. The Minerals Commission is not against mining but we want people to go through the due process. We have a lot of people around who are not following due process and are mining in ways that are polluting our river bodies and posing health threats to the public.

“The government thought it very wise to as part of the measures we are adopting against illegal mining employ you so that you can help check these illegalities. You’ll be training on how to swim, be disciplined so that you will help Ghana to clean our river bodies,” he said.

When they passed out, the trainees will be deployed to the various river bodies to provide permanent patrolling activities on those river bodies.

The government earlier this year purchased some speedboats to aid in the fight against illegal mining.

All 300 persons are expected to undergo the training in three batches.