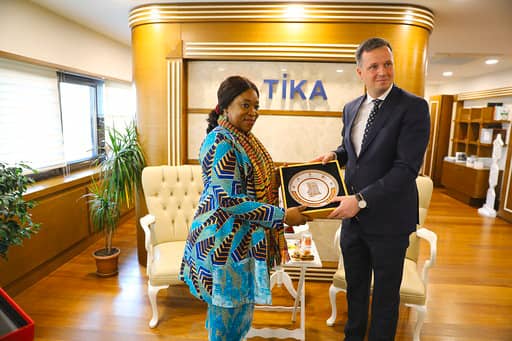 Minister for Foreign Affairs and Regional Integration, Shirley Ayorkor Botchwey, has held talks with the Turkish Speaker of Parliament, Rt. Hon. Mustafa Sentop and some Turkish Members of Parliament (MPs) who are part of the Turkish Parliamentary Friendship Association.

The discussions during the meeting centered on strengthening relations between the Parliaments of Ghana and Turkey.

Speaking during the meeting with the Turkish Speaker of Parliament, the Foreign Minister of Ghana and Member of Parliament for Anyaa Sowutuom said relations between Ghana and Turkey, which dates back to the 1960s, have remained strong and friendly over the decades.

According to her, the two countries share a lot of common values such as the practice of democratic governance with strong and striving institutions such as Parliaments working to consolidate the gains made over the years since the two adopted multi- party democracy.

The Ghanaian Minister lauded the founders of the Ghana-Turkey Parliamentary Association, which was birthed on 21st March, 2011 and underscored its importance as a mechanism to deepen relations between the two legislatures.

She reiterated that since its founding, there have been high-level exchanges between the two Parliaments with the recent visit to Turkey by a two member Ghana Parliamentary delegation in February 2018 led by Salihu Dandaawa Alhassan.

Hon Shirley Ayorkor Botchwey expressed the view that exchanges would enable the two institutions to exchange best parliamentary practices and to deepen their collaboration.

The Minister recalled that President Tayyip Reccep Erdogan addressed Ghana’s Parliament during his Official visit to the country in 2016, which was the first time a Turkish President addressed a Parliament in Sub-Saharan Africa, and noted that it was a testament to the deepening relations between not just the two institutions but, more importantly the two countries.

She therefore seized the opportunity to call for exchanges between the two Speakers to each other’s country to strengthen ties and deepen knowledge sharing.

Meanwhile, the Minister
called for more collaborations betwrrn the Turkish and Ghanaian parliamentarians in order to further build their capacities and to deliver optimally and help build a stronger institution for the benefit of their citizenry who they represent.

She indicated that Ghana is going to the polls this year, 2020 to elect a new President and Parliamentarians and assured her host that President Akufo-Addo’s Government will ensure that the elections are free, fair, transparent and credible.

Meanwhile, in a separate meeting with the President of the Turkish International Development Agency (TIKA), Serdar Cam, Hon. Ayorkor Botchwey on behalf of Ghana thanked the Government of Turkey and in particular TIKA for all the development assistance extended to Ghana over the years.

The Minister further commended TIKA for its work around the world and for extending needed development assistance to support other countries.

She however called for TIKA offices to be set up in Ghana to further strengthen the Ghana-Turkey Relations.