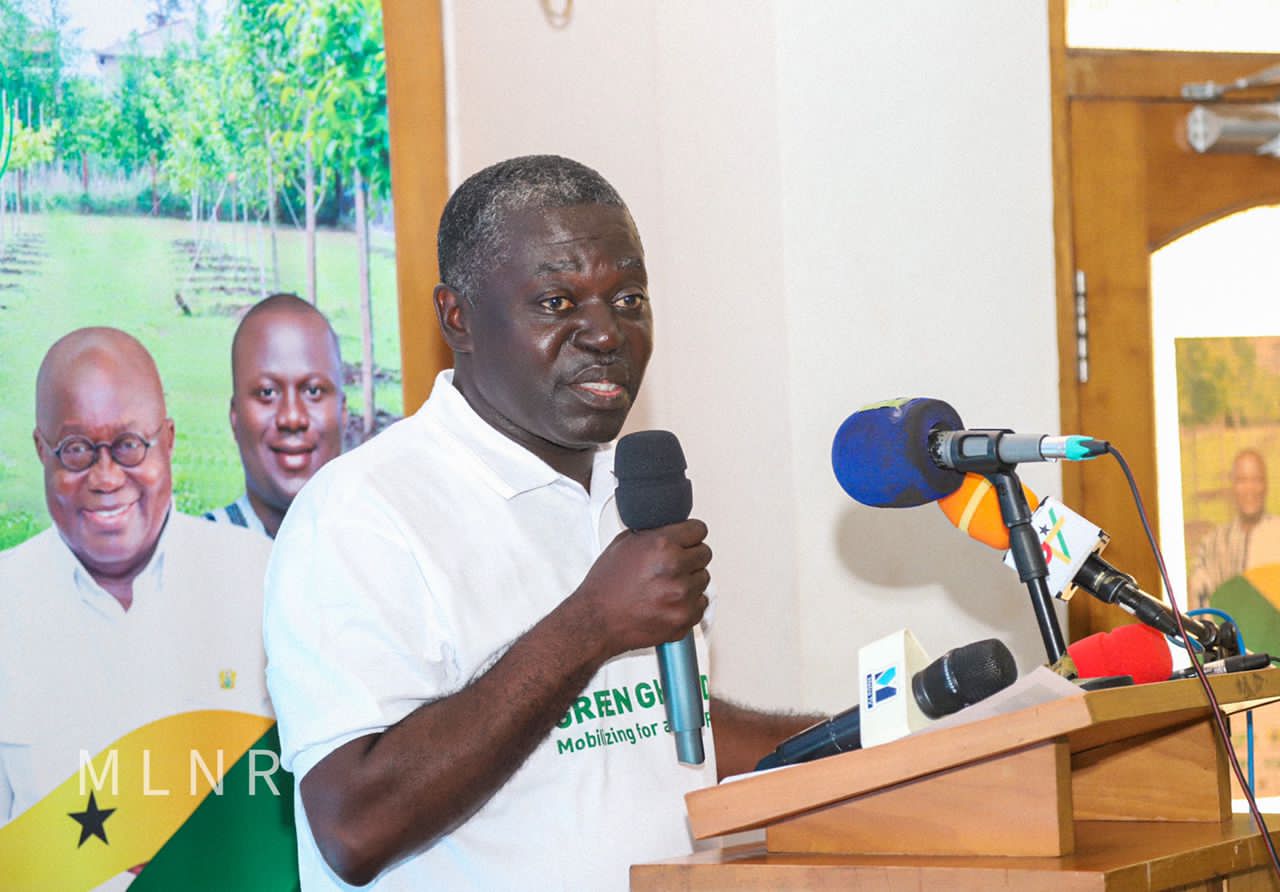 The Deputy Minister for Lands and Natural Resources Hon. Benito Owusu-Bio, who doubles as the National Chairman of the 2022 Green Ghana Planning Committee has disclosed that a total of 22,671,696 million seedlings have so far been distributed for the 2022 edition of the Green Ghana agenda, which well exceeds that initial 20 million seedlings targeted.

Addressing the media on behalf of the Sector Minister, Hon. Samuel, A. Jinapor during a press conference in the aftermath of the Green Ghana Day, on Monday, 13th June, 2022, the Deputy Minister called for effective monitoring and supervision of the seedlings planted to fuel the success of the 2022 edition of the government’s aggressive afforestation and reforestation program.

“We need to make conscious efforts to nurture the trees by watering them, protect them from destruction, prevent fires, weed under them until they grow to maturity,” he said.

The Deputy Lands Minister added that the “survival rate this year will be more than the 85% survival rate last year. The Ministry has put in place a Monitoring and Assessment Team under the Chairmanship of Hon. Francis Manu-Adabor, who is the Chairman of the Parliamentary Select Committee on Lands and Forestry to undertake comprehensive field assessment of trees planted this year which includes other members of the Committee like myself and the CEO of the Forestry Commission.”

Hon. Owusu-Bio used the occasion to rebuff claims by some section of the media that the Green Ghana Day program was politicized and partisan, indicating that the Green Ghana Day was a national assignment and that the inclusiveness of Ghanaians with diverse backgrounds in the political and religious landscape such as the Former President of Ghana, H.E John Dramani Mahama, Former President John Agyekum Kufuor, the National Chief Imam and high profile members of the Clergy gives this clear indication that it is for Ghana.

In responding to a question posed by the media on the budget and expenditure of the Green Ghana Day, Hon. Benito Owusu disclosed that so far, GHC 6 Million cedis was disbursed to the Ministry for the Green Ghana Day, out of which the 22 Million tree seedlings were obtained, which also included publicity and other expenses in the lead up to the planting.

He added that subsequently, a detailed report of the expenses will be made available to the public just like that of last year.

The CEO of the Forestry Commission, Mr. John Allotey on his part, gave an in-depth presentation on the provisional results of the seedlings distributed and planted on the Green Ghana Day.

Pertinent among things highlighted in his presentation were the individual targets assigned to Regions and the actual results achieved.

He noted that among the 16 regions, the Ashanti, Ahafo, Bono, Bono East, Eastern, and the Greater Accra Regions exceeded their target while the Northern, North East and Oti Regions are yet to meet their target due to low rainfall in these regions.

He said, from the 50% target purported to be planted in the forest reserves, 40.2% have been planted and the other 50% for homes and other locations have seen a 59.8% work done while reiterating that on the whole 22,671,696 seedlings have been distributed so far.

“The national target was to plant 20 million seedlings but as we speak now, we have distributed 22,671,696 and even with this, the districts are still entering some of the figures and so we will update you as and when they come in” He disclosed

He mentioned the highest seedlings distributed per demand, naming Teak, Ofram, Cinderella, Acacia, and Mahogany as examples, adding that Fruits and Timber species as examples of the species most requested.

The CEO also welcomed the role of the media in helping to monitor the seedlings planted during Green Ghana Day and added that all information regarding Green Ghana is available at the District Level of Forestry Commission.

He applauded some lead private plantation companies and churches who contributed to the success of the Project, outlining Global Green, Sanatex Ghana, Form Ghana, Sakam Savanna, The Pentecost Church, Catholic, Apostolic, Methodist and Assemblies to God as examples.