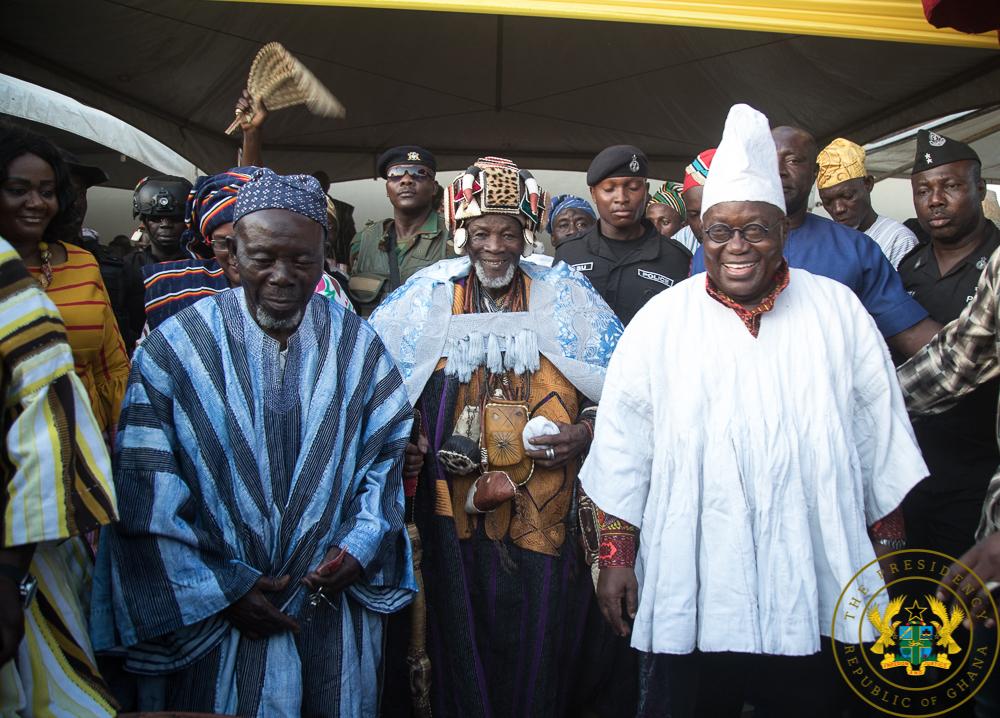 The President of the Republic, Nana Addo Dankwa Akufo-Addo, says great developments lie ahead of Dagbon, following holding of the Damba Festival, the first in over three decades.

According to President Akufo-Addo, “for thirty over (30) long years, it had been impossible to hold this festival. Indeed, for many years before the explosion of the crisis in 2002, there was always tension surrounding the festival, thus robbing it of the joyful atmosphere that should permeate the celebrations.”

Addressing the gathering at the festival in Yendi, on Saturday, the President indicated “today, we have proof that the peace of Dagbon is holding, and we can begin to point to concrete signs of the peace dividend. The young people of Yendi, who have known nothing but strife, now can see another and more attractive side of their heritage.”

“today, we have proof that the peace of Dagbon is holding, and we can begin to point to concrete signs of the peace dividend. The young people of Yendi, who have known nothing but strife, now can see another and more attractive side of their heritage.”

Taking note of the concerns of Yaa-Na Abukari Mahama II, President Akufo-Addo assured him that his Government and security agencies will do all that is possible to guarantee the peace and security of Nanton, and assist to bring lasting calm and solution to the chieftaincy problem there.
Additionally, he stressed that the Yendi Water Project will commence soon.

Touching on the vast deposits of iron ore at Sheini, the President revealed that, (10) days ago, he inaugurated the governing board of the Ghana Integrated Iron and Steel Development Corporation, whose purpose is to exploit and add value to the country’s considerable iron ore deposits at Oppon Manso and Sheini.

Under the chairmanship of one of your prominent citizens, Prince Imoro Andani, whose purpose is to exploit and add value to the country’s considerable iron ore deposits at Oppon Manso and Sheini.

“Great developments in Dagbon are ahead, and it is critical, therefore, that there must be peace. My government is determined to open up the country with the provision of adequate road, rail and air networks, so that no part of the country can be said to be too far from anywhere,” he said.

On the deplorable state of the road network in the Northern Region, and, indeed, in all parts of the country, President Akufo-Addo indicated that his government has embarked on an aggressive programme of implementation of addressing the road deficit.

“This region will not be left out of this programme, Yaa-Na, I can assure you of that, as I can about the imminent completion of the Tamale Teaching Hospital, and the upgrading of Yendi Government Hospital to a befitting status. My government is determined to deal with all these unfortunate legacies of the past. The provision of land for a satellite campus of UDS is a far-sighted gesture, which will definitely yield positive results,” he added.

It was the firm belief and fervent hope of President Akufo-Addo that Dagbon will be trafnsformed from a troubled spot to an exciting and dynamic community.

“In our lifetime, Dagbon would shed its image of a troubled spot, and become the place to go to for all that is dynamic and exciting in our country.”

He continued, “The majestic horse riders, today, have already demonstrated that certain old skills are still intact. The future is bright, and I have seen a large part of that future today in Yendi”.