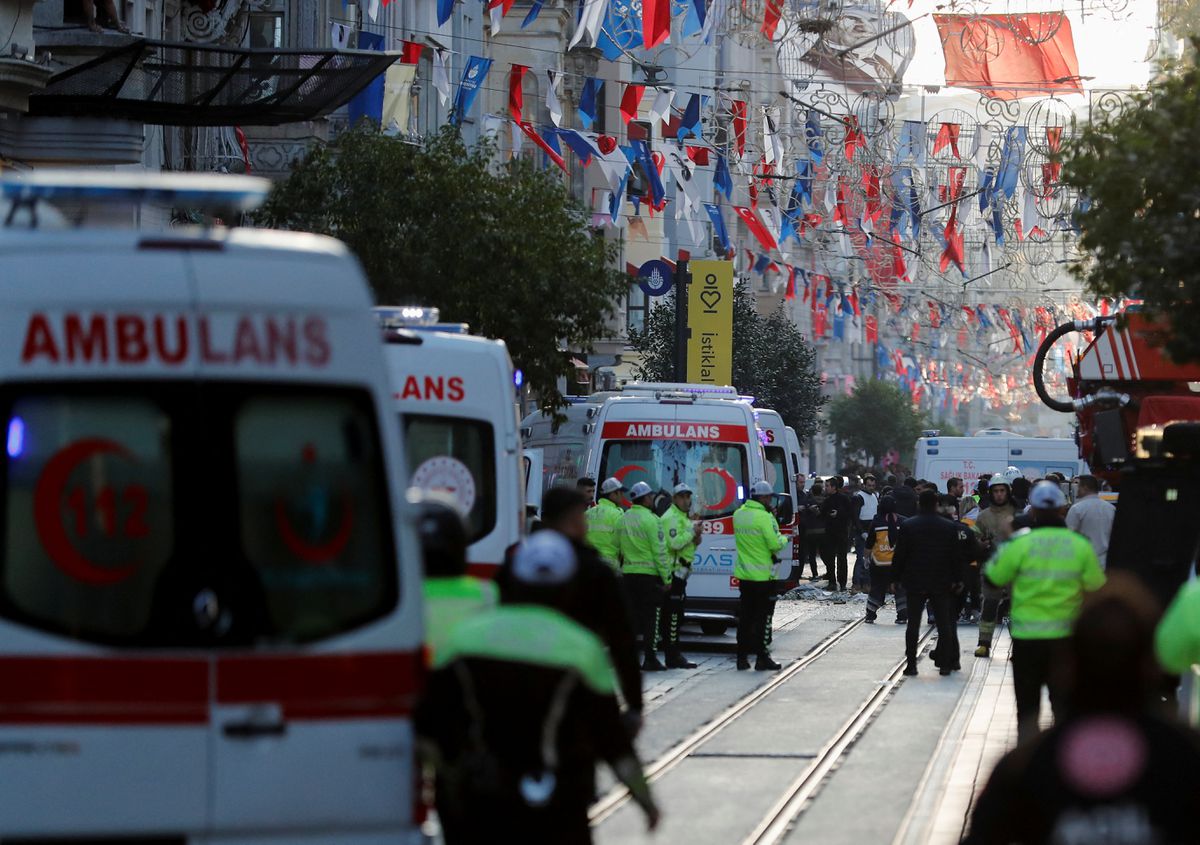 At least six people have been killed and 81 wounded in an explosion in a busy area of central Istanbul, Turkish authorities have said.

The blast happened at about 16:20 local time (13:20 GMT) on Sunday on a shopping street in the Taksim Square area.

A suspect has now been arrested, the interior minister said.

Vice-President Fuat Oktay earlier said the blast was thought to be a terrorist attack carried out by a woman.

President Recep Tayyip Erdogan said the perpetrators would be punished.

Speaking at a news conference in Istanbul, he condemned what he called the “vile attack” and said “the smell of terror” was in the air.

Justice Minister Bekir Bozdag told Turkish media a woman had sat on a bench in the area for more than 40 minutes, leaving just minutes before the blast took place.

On Monday morning, Interior Minister Suleyman Soylu said a person suspected of having left the bomb had been arrested by police, and accused the Kurdistan Workers’ Party (PKK) of responsibility.

The PKK is a militant group that calls for an independent Kurdish state within Turkey. The EU and the US regard it as a terrorist organization.

No one has so far claimed responsibility for the blast.

BBC correspondent Orla Guerin, who is in the area, said there was a heavy police presence around Istiklal Street, which had been cordoned off. Helicopters were circling overhead as ambulances went back and forth.

Many shopkeepers standing in their doorways on the normally bustling street looked stunned, she said, adding that the incident will have come as a shock to many in the city.

Hayat, who was in an internet café on Istiklal Street when the blast took place, said there was turmoil following the explosion.

“I saw people running around and wounded people were passing by the internet café towards hospital,” she said. “It was a frenzy.”

Another eyewitness, Cemal Denizci, was about 50m (54 yards) from where the blast took place when it happened. “There was black smoke. The noise was so strong, almost deafening,” he told AFP.

20-year-old Eyup told the BBC “there is fear” among residents of Istanbul following the attack, adding that more people may choose to stay away from crowded areas like Taksim.

In the wake of the attack, condolences to Turkey have poured in from around the world.

The US said it stood “shoulder-to-shoulder” with its Nato ally in “countering terrorism,” according to a statement from White House press secretary Karine Jean-Pierre.

French President Emmanuel Macron wrote in a tweet in Turkish: “We share your pain… We are with you in the fight against terrorism.”

Ukrainian President Volodymyr Zelensky, also writing in a tweet in Turkish, said: “The pain of the friendly Turkish people is our pain.”

Countries including Pakistan, Italy and Greece also expressed their solidarity.

Istiklal street – one of the city’s main arteries which are usually packed with shoppers – was previously targeted by a suicide bomber in 2016.