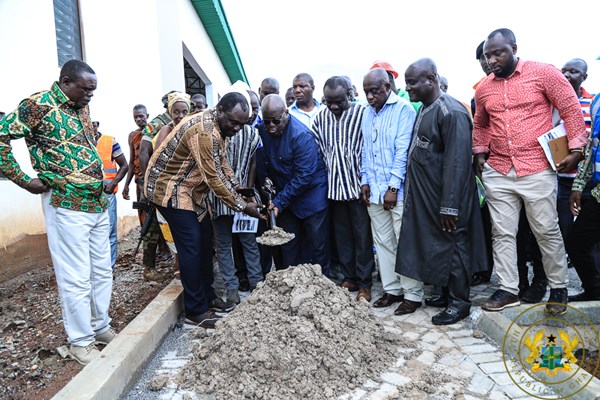 The President of the Republic, Nana Addo Dankwa Akufo-Addo, has inspected a Technology Solution Centre (TSC) in Kumawu, in the Ashanti Region, which will support Government’s industrialization agenda, particularly the 1-District-1-Factory initiative.

The Centre, run by the Ministry of Trade and Industry, is a metal-based, light engineering (machining and fabrication) workshop with offices, classrooms, show rooms and conference facilities, and will, amongst others, produce spare parts and repair services for factories in the various districts of the country.

Taking the President on a tour of the facility, on Friday, 11th October, 2019, on the final day of his 3-day tour of the Ashanti Region, the Deputy Minister for Trade and Industry, Robert Ahomka Lindsay, and Mr. Kwasi Atta-Antwi, Director of the TSC told President Akufo-Addo that 30 of such centres are being established in the country.

Five (5) new and larger TSCs are at various stages of completion in Kumawu, Elmina, Hohoe, Dormaa and Savelugu. 21 existing Rural Technological Facilities (RTFs) are also being renovated, retooled and upgraded into TSCs. 4 RTFs in Awutu Senya, Somanya, Gwollu and Suhum have also been adopted and will be renovated, retooled and transformed into TSCs.

The Kumawu TSC, according to Mr. Kwasi Atta-Antwi, “is a $4 million facility, which will provide equipment, machines that will, in turn, produce can produce agro-processing equipment, bolts and nuts to support the factories that are being established under the 1-District-1-Factory initiative.”.

The Deputy Minister for Trade and Industry assured the President that “Next year, you are going to commission a lot of the TSCs. We have so many that are going to be commissioned. We have all the equipment ready in Kumasi. They will be installed here in the next month or two.”

With the country now possessing the capability of making its own industrial machines, President Akufo-Addo described the move as “critical to the industrialization of our country.”