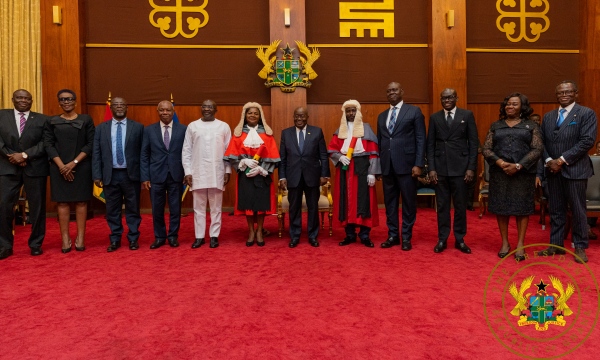 The President of the Republic, Nana Addo Dankwa Akufo-Addo, has called on all stakeholders to join efforts towards building a new Ghanaian civilization, where the rule of law is not a slogan but an operating principle for the development of the country.

According to the President, “all of us, from the executive, legislature, judiciary, public sector, security agencies, private sector, political parties, civil society, professional and trade associations, religious bodies, traditional authorities and ordinary citizens have a collective responsibility to work together with our different views and our different perspectives for the Ghana project.”

“A united Ghana driven by considerations of social justice and solidarity governed according to the rule of law, respect for individual liberties, human rights, and the principles of democratic accountability,” he said.

President Akufo-Addo said this when he swore Justice Barbara Frances Ackah-Yensu and Justice Samuel Kwame Adibu Asiedu into office as Justices of the Supreme Court in accordance with the accordance with the stringent details of Article 144 Clause 2 of the constitution of Ghana.

The swearing-in of the Justices, the President said, “comes on the heels of rigourous nomination and confirmation processes initiated by the Judicial Council and undertaken in consultation with the Council of State with the approval of Parliament.”

Expressing confidence in the nominees, he said, “the Post 1966 Supreme Court has developed a positive reputation for the quality of its constitutional jurisprudence, and I am hopeful that you who have already given good accounts of yourselves in high judicial office in the court of appeal will help strengthen the development of our nation’s constitutional and other jurisprudence in the Supreme Court.”

“Central to the execution of these functions, is the Supreme Court. As expressed in Article 129, the Supreme Court, our nation’s court of last resort, is not bound to follow decisions of any other court including its own and shall have all the powers, authority and jurisdiction vested in any court established by the constitution or any other law,” the President added.

Therefore, “since Article 129, positions the Supreme Court as the policy court, where far-reaching decisions on our socio-economic development are fashioned in response to the exigencies of the time, perspectives of its judges are thus critical for our national development especially in these challenging times.”