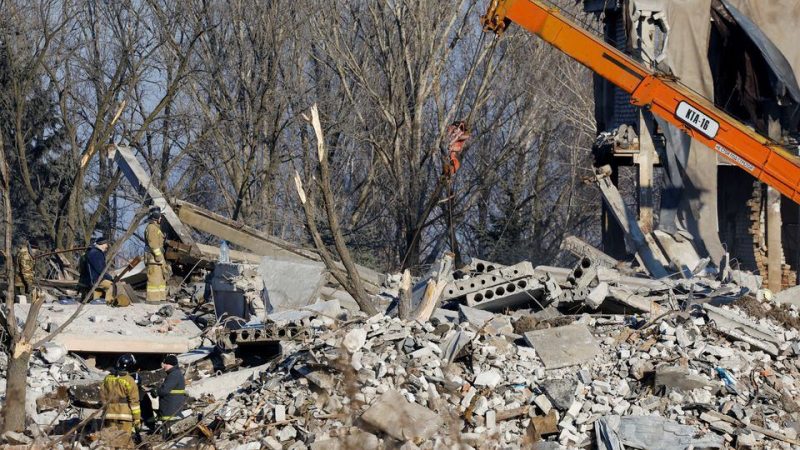 Russia has said a New Year’s Day missile attack which killed at least 89 Russian soldiers happened because troops were using their mobile phones.

The use of banned phones allowed the enemy to locate its target, officials said. An investigation has already begun.

Ukraine says 400 soldiers were killed – and another 300 wounded – in the attack on a college for conscripts in Makiivka, in the occupied Donetsk area.

It is the largest number of deaths Russia has acknowledged in the war.

Russia said that at 00:01 local time on New Year’s Day, six rockets were fired from a US-made Himars rocket system at a vocational college, two of which were shot down.

The deputy commander of the regiment, Lt Col Bachurin, was among those killed, the ministry of defense said in a statement on Wednesday.

A commission is investigating the circumstances of the incident, the statement said.

But it is “already obvious” that the main cause of the attack was the presence and “mass use” of mobile phones by troops in range of Ukrainian weapons, despite this being banned, it added.

“This factor allowed the enemy to locate and determine the coordinates of the location of military personnel for a missile strike.”

Officials found guilty in the investigation will be brought to justice, the statement added, and steps were being taken to prevent similar events in the future.

Russia also raised the number of Russian soldiers killed in the attack to 89 – up from 63 – although there is no way of verifying how many soldiers were killed. It is extremely rare for Moscow to confirm any battlefield casualties.

The vocational college was packed with conscripts at the time – men who were among the 300,000 called up in President Vladimir Putin’s partial mobilization in September. Ammunition was also being stored close to the site, which was reduced to rubble.

Some Russian commentators and politicians have accused the military of incompetence, saying the troops should never have been given such vulnerable accommodation.

Pavel Gubarev, a former leading official in Russia’s proxy authority in Donetsk, said the decision to house a large number of soldiers in one building was “criminal negligence”.

“If no-one is punished for this, then it will only get worse,” he warned.

The deputy speaker of Moscow’s local parliament, Andrei Medvedev, said it was predictable that the soldiers would be blamed rather than the commander who made the original decision to put so many of them in one place.

President Putin signed a decree on Tuesday for families of National Guard soldiers killed in service to be paid 5m roubles (£57,000; $69,000).