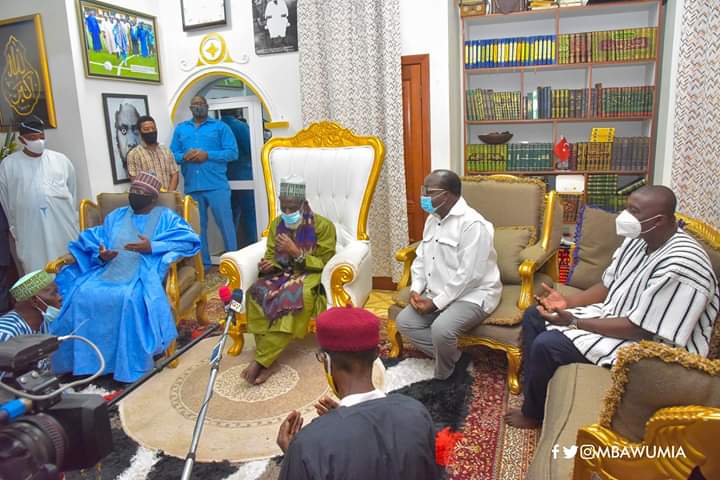 The National Chief Imam, Sheikh Osman Nuhu Sharubutu has commended Vice President Dr. Mahamudu Bawumia for his sense of duty and commitment to the welfare of the vulnerable in Zongos and the nation since assuming the high office of Vice President.

Sheikh Sharubutu said Ghana is a special country which is enjoying Allah’s grace and destined for greatness, adding that because it is only Allah who determines who rules, having President Akufo-Addo and Dr. Bawumia currently leading the country is part of Allah’s will and blessings for the country.

He, therefore, prayed for the Vice President and the President for Allah to uplift them and also bless them.

“I pray for Allah’s continuous blessing for this country and I pray to Allah to bless your good works and that of the President. May Allah increase our country in prosperity and may Allah increase you in blessings,” Sheikh Sharubutu told Dr. Bawumia during the visit.

The Vice President, who was accompanied by the National Chairman of the NPP, Freddy Blay and MP for Okaikoi Central Hon. Patrick Boamah, said it is customary for him to come and inform his father about his re-nomination as running mate to President Akufo-Addo for December’s elections and seek his father’s continuous prayers and blessings.

“You would have heard that His Excellency Nana Addo Dankwa Akufo-Addo has nominated me for the 4th time to be his running mate. So I have it as a duty to officially come and inform my father the National Chief Imam because every time this has happened, I had come to inform him that it has happened, as a son would do to a father to say this is what has been given to me,” Dr. Bawumia said.

“Not only to inform him, but we all know that it is only Allah that grants anybody authority or power, or as we say in Hausa “sarauta”. Only Allah gives that power to you to serve other people so when you are seeking that power, you first have to seek the face of Allah and blessing from Allah and this is why I am here; not only to inform him but to ask for his blessings and prayers. We did say in 2016 that the battle is the Lord’s. Still, the battle is Allah’s. It hasn’t changed and that will never change.”

On behalf of President Akufo-Addo, Vice President Bawumia thanked the National Chief Imam for the role he has played in the peace and unity in the country, as well as his continuous prayers and advice for the government.

“We know the sort of person the Chief Imam is. He has held this country together through his interaction with different faiths; Muslims and Christians. The peace in this country, the unity in this country has a lot to do with him so the third reason for my coming is also to thank him for what he has done for this country. I have always said that he is a gift to Ghana; a real gift to Ghana and we cherish this gift.”

“I want to, on behalf of the President Nana Addo Dankwa Akufo-Addo thank him for his continuous prayers.”

“As we have been in office for the past three and a half years, we have continued consulting him and asked him for prayer and he has always obliged, and we believe that his prayer are part of the reasons we are having the peace that we have in Ghana.”

4 more to do more

Dr. Bawumia recalled the 2016 promise President Akufo-Addo made to the National Chief Imam and Zongos to prioritise Zongo development if he was elected President.

The Vice President said after three and half years in office, the President has fulfilled the promise by establishing a ministry purposely for zongo development, as well as a fund, the Zongo Development Fund, which provides statutory funding for development projects in zongos.

On education, Dr. Bawumia said it is a guarantee for development and poverty eradication and that informed the decision by his office to collaborate with the Zongo Development Fund and the Zongo Ministry to offer an unprecedented 40 scholarships to brilliant but needy students from Zongo and other deprived communities to go and study medicine in Cuba.

On a broader scale, he said President Akufo-Addo’s Free SHS policy has also provided several children from zongos free access to education up to the senior high school level.

Dr. Bawumia said President Akufo-Addo has demonstrated his sincerity and commitment to the development of zongos, and assured that he and the President will do more for Zongos and the nation if the good people of Ghana give them four more years in December, “in shaa Allah”.