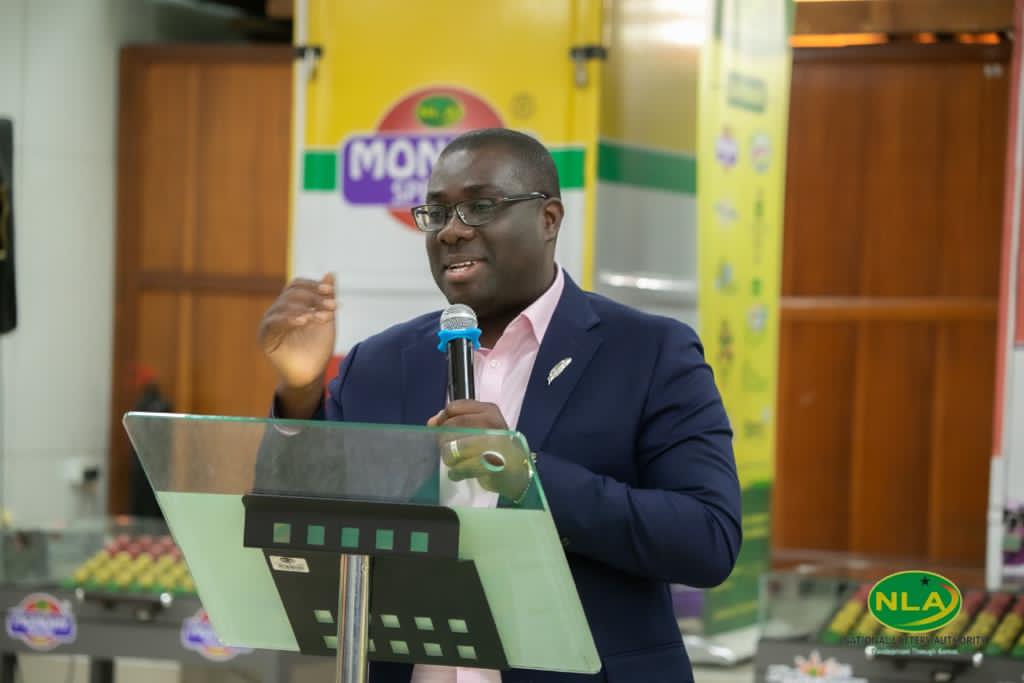 The National Lottery Authority (NLA) has celebrated its achievements under the leadership of its Director-General Sammi Awuku in just one year in office.

According to the NLA, a litany of issues confronted Mr. Awuku, former National Organizer of the governing New Patriotic Party (NPP) when he was appointed as the Director-General of the Authority.

These, include the litany of issues that would confront the then National Organizer of the New Patriotic Party, Sammi Awuku as he is popularly known on his appointment as Director-General of the National Lottery Authority, (NLA).

On his first day at work on 9th August 2021, Mr. Samuel Awuku re-echoed the words he had said to President Akuffo-Addo, to Management and Staff of the NLA, “I would like to assure you that I am deeply committed to upholding the integrity of this flagship institution. I am not here to inherit anybody’s enemies, I would work effectively with the Board, Management and Staff to ensure a better NLA. Let us all put our shoulders to the wheel and give off our best to generate revenue for the Authority and the government”.

One year on, in finding out if these issues persist and how the organization has done under the leadership of Mr. Samuel Awuku, he admits that though he has had his fair share of what he terms, triumphs and tragedies, there is a lot more the NLA can achieve. Yet the Authority has made some strides in its quest to generate revenue, give back to society and improve Staff welfare, which deserves commendation.

STAFF WELFARE
According to Mr. Samuel Awuku, one of the first things he noticed on assuming office at the NLA was the animosity between the Union and Management and a generally polarized environment split along political lines.

While this could play to his advantage as a politician, he chose to be the unifying force. In his words, “I knew I had to bring back the love to get the Authority to work again.”

Through dialogue and several negotiations devoid of hostility between Management and the Union, the gap gradually narrowed. This led to the signing of the Public Services Commission Review Report, which gave all Senior and Junior Staff upward adjustments in salaries and grades. The signing of the report meant each member of Staff had an equal opportunity to rise to eliminate a culture of nepotism and cronyism.

Unpaid allowances and bonuses of Staff were also paid. Team bonding initiatives and activities like the Employee of the Month Recognition scheme and Customer Service Week have been instituted to boost the morale of Staff.
That notwithstanding, unpaid wins which amounted to about Fourteen million Ghana cedis (GHS 14,000,000.00) and caused a lot of distress for some Staff who were attacked, have almost been cleared. While the Authority is yet to hit the figures it desires, the sales are no more declining.

In fulfillment of its agreement with the Veterans Administration Ghana (VAG) NLA has purchased a cross-country vehicle for VAG and pays a monthly sum of One hundred and twenty thousand Ghana cedis (GHS 120,000.00) including other auxiliary costs.

NLA also presented a cheque of Ten million Ghana Cedis (GHS 10,000,000.00) to its supervisory ministry, the Ministry of Finance and Economic Planning, in support of the YouStart programme.

INITIATIVES
The re-launch of the Caritas Lottery Platform and the launch of the Good Causes Foundation in October 2021 perhaps set the tone for some good fortune for the NLA. Before its re-launch, the Caritas Lottery Platform, established in 2012, to raise revenue through consumer promotions for organizations and individuals, to support the needy, vulnerable and destitute was vibrant but experienced a lull along the way. It was therefore not raking in as much revenue, as it ought. With its relaunch, however, Corporate Ghana is steadily getting back on board, thus generating some revenue for the Authority.

The Good Causes Foundation, hitherto known as Special Projects has supported the lives of individuals, communities and institutions nationwide in the areas of Health, Education, Youth and Sports Development and Arts and Culture, the four pillars under which the Foundation operates.

From providing medical equipment like incubators to supporting the mentally challenged, providing educational support and supporting young football clubs like Hazaacas Ladies, the Good Causes Foundation is epitomizing its tagline, Impact through Games.

Although the Good Causes Foundation draws its funding from the Caritas Lottery Platform, with the new direction of Management, under the leadership of Mr. Samuel Awuku and the Board of Directors, chaired by Togbui (Hon.) Francis Albert Nyonyo, NLA in its re-negotiated deal with KGL Technologies Ltd., secured an amount of Two million Ghana cedis (GHS 2,000,000.00) to support the Foundation.

Additionally, as part of their Licensing Agreement, Private Lotto Operators (PLOs) working under the frameworks of the National Lotto Act 2006 (Act 722) and Veterans Administration Act 2012 (Act 844) are required to pay an amount of One hundred thousand Ghana Cedis (GHS 100,000.00) and Fifty thousand Ghana cedis (GHS 50,000.00) respectively, to support of the Good Causes Foundation.

Another initiative that caught the attention of many football fans is the support of the two biggest clubs Kumasi Asante Kotoko and Accra Hearts of Oak with One Million Ghana cedis each (GHS 1,000,000.00) with the launch of the atena game.

Notable among them all could be the introduction of the Sunday Aseda Draw, the first in the history of NLA in its 60 years of its existence, to give patrons an additional opportunity to play and win, and enable companies who want to organize promotions on Sundays the ability to do so.

Another first, for the Authority, is the live draw of the National Weekly Lotto Game in Obomeng- Kwahu during the Easter celebration. For the first time, ever NLA took its machines outside of Accra to bring the draw closer to its patrons.

NLA intends to purchase new draw machines by December 2022 to make the game even more exciting for its patrons.

LICENSING OF PRIVATE LOTTO OPERATORS (PLOS)
It has not all been gloomy for the NLA as some thorny issues persist. Activities of fraudsters who impersonate Staff on WhatsApp and Facebook to solicit money in exchange for purported winning lotto numbers is a bane the Authority needs to step up efforts in fighting.

Another challenge that bedevils NLA is the activities of illegal lottery operators who have dominated the market.
To help curb the situation, Mr. Awuku adopted a strategy begun by his predecessor to license all Private Lotto Operators in a bid to sanitize the lottery industry. NLA, therefore, issued a release in September 2021 for all unlicensed Lotto Operators, interested entities and/or individuals who wish to be registered and subsequently licensed to operate and sell Lotto products, to pick up Pre-Qualification Application Forms from any of NLA’s Regional Offices for completion and submission.

LIST OF OPERATORS UNDER ACT 844
• OBIRI ASARE AND SONS LIMITED
• FORTUNE SYNERGY LIMITED
• FROM HOME COMPANY LIMITED
• WULUCKY GHANA LIMITED
With this in place, NLA’s force task force in collaboration with the security services continues to clamp down on defaulters of the law. NLA is working on establishing new branches in parts of the country where it has no presence to rake in revenue and deflate the activities of illegal lottery operators.

60TH ANNIVERSARY AND ALA CONFERENCE
On assumption of office, Mr. Awuku embarked on some trips in the sub-region, i.e. Ivory Coast, Nigeria and subsequently Morocco. The objective was to find out what they are doing differently in their operations, learn from it and deepen bilateral relations with them. The Authority has also played host to the Ivoirians, Nigerians and a delegation from Niger.

Ultimately, one cannot lose sight of the fact that in the past year, the National Lottery Authority in spite of the challenges it grapples with has made great strides under the leadership of its Director-General, Mr. Samuel Awuku and has changed the face of NLA.