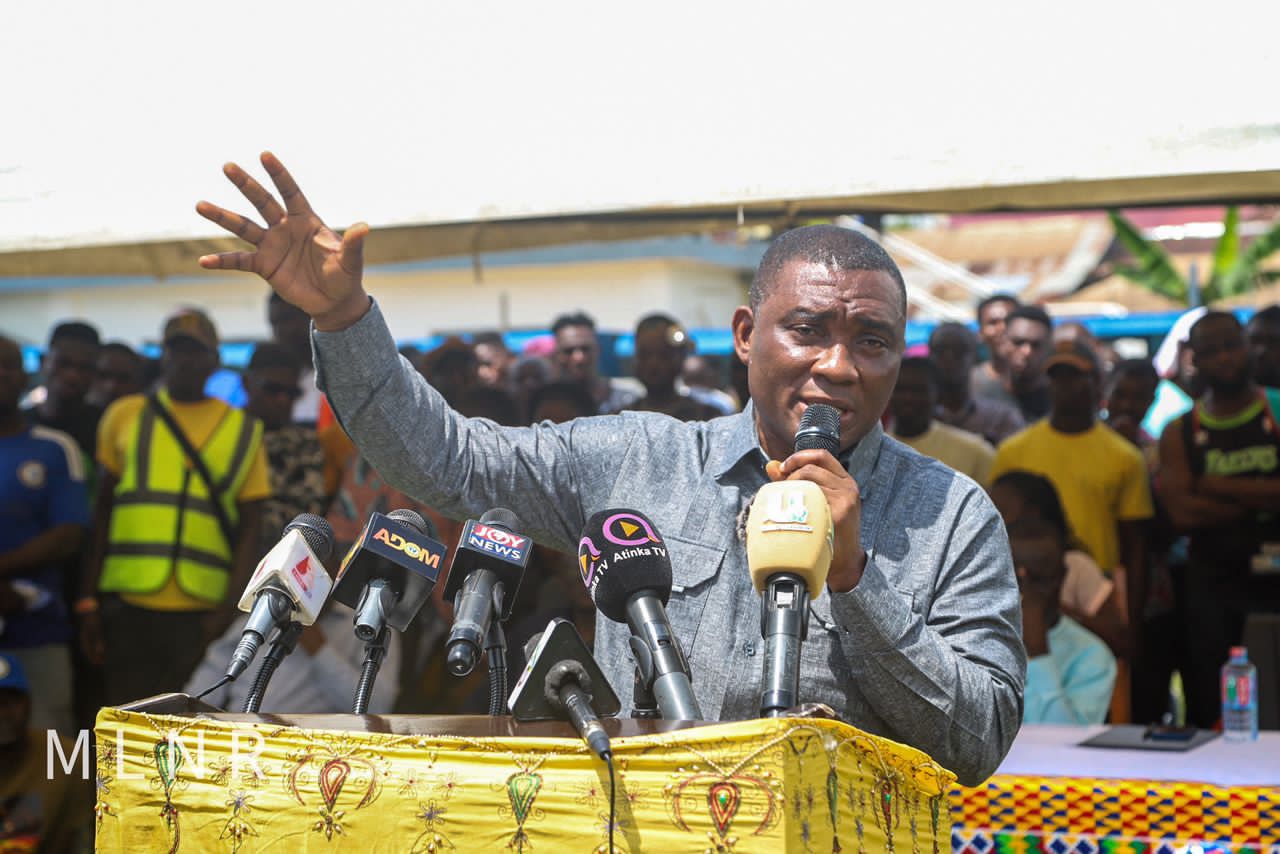 Our waterbodies should be clean by March 2023 – Hon. Mireku Duker throws a challenge to Ghanaians

The Deputy Minister for Lands and Natural Resources responsible for Mines, Hon. George Mireku Duker has expressed optimism that Ghana’s waterbodies which have been polluted by illegal mining activities could regain their lost purity status by March 2023 if we are all committed to the fight against illegal Mining.

Hon. Mireku Duker is reassured and encouraged by the fact that the measures introduced by the government are already yielding results and that if the trend is sustained by the first quarter of 2023, there will be a drastic improvement in the quality of the water bodies.

He noted that the training of river wardens, who will complement the Operation Halt II task force is another laudable initiative by the government towards the liberation of waterbodies from galamsey operations.

Speaking at a Community Sensitization on Illegal Mining in Tarkwa on Thursday, October 27, 2022, Hon. Mireku Duker averred that the introduction of digital innovations such as registering and tracking all earth-moving equipment in the country as well as the Community Mining Scheme will guarantee success for the government in its fight against illegal mining.

He, however, asserted that the innovations and efforts by the government will not see the light of day if traditional authorities and residents of mining communities do not join in the fight against illegal mining.

He, therefore threw a challenge to the chiefs and residents of Tarkwa and its environs to extend helping hands to the government to purge the Bonsa River of the pollution from galamsey operations.

Hon. Mireku Duker appealed during the engagement at Tarkwa that if the residents cooperate with the government, he is certainly without any sense of ambiguity that by March 2023, the Bonsa River passes through the community would be pure and safe.

He cautioned the mining communities that the government which has demonstrated a strong commitment to protecting legal small-scale mining businesses would be left with no option but to heed the call of those who are asking for a ban on small-scale mining if it does not enjoy the collaborative efforts of the indigenes of the communities.

“There are suggestions for the government to close down small-scale mining activities but we are aware of the number of job opportunities created in the small-scale mining sector. The Bonsa River has been destroyed. 100 year ago, they mined gold here in Tarkwa but the river was clear so how have we allowed greed to make us destroy our river”, he said.

“The leadership of the small-scale miners in Accra has also assured us of their support to ensure that the Birim River in the Eastern region is cleared. It is the responsibility of everyone to fight illegal mining. Government alone cannot fight illegal mining, we need your collaboration. The government has recruited river wardens whose job is to provide constant patrol of the Pra, Tano, Bonsa, and Ankobrah, among others. They’ve been given speedboats to do their job. The river guards have uniforms stuffed with body cameras and their movements will be monitored,” he said.

The MCE for Tarkwa-Nsuaem, Benjamin Kesse said the people of Tarkwa-Nsuaem will not sit down aloof and watch others destroy their livelihoods. He assured that they will provide intelligence to the security authorities about galamsey operators.

Nana Adakwa Bediako III, Dzasehene of Apinto commended the government for the Community Mining scheme in the area, revealing that many lives have been impacted positively by the innovative mining scheme. He promised that his community will not allow galamsey operators to create a bad name for them.