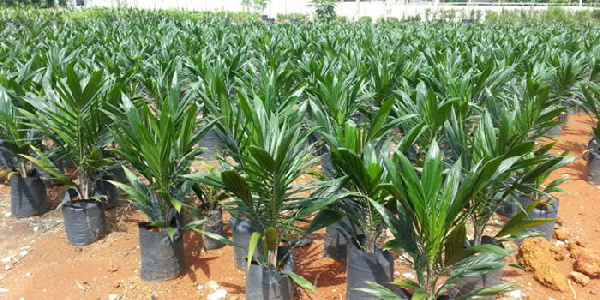 The Suhum Municipal Assembly has distributed 50,000 hybrid palm seedlings to over 500 farmers in the municipality as part of effort to promote the crop under Planting for Export and Rural Development (PERD).

The assembly in collaboration with the department of Agriculture and the farmers seek to encourage farmers in the municipality to cultivate oil palm on a large scale to serve as raw material for the establishment on a processing plant and to support the export drive of the community as well as improve their livelihoods.

It was revealed that, the assembly is targeting to nurse and distribute over 3 million seedlings in the municipality on a total land size of 10,000 hectares in 5 years for its competitive advantage.

In all 50,000 hybrid palm seedlings were distributed, 25,000 each at both Suhum-Okorase and Akorabo-Zorh farming communities where more than 500 farmers received oil palm seedlings for free.

Madam Margaret Darko Darkwa, the Suhum Municipal Chief Executive (MCE), who handed over the seedlings to the Department of Agriculture for onward distribution to the farmers at a brief ceremony, lauded government for bringing such lucrative policies to attract foreign investors and the youth to acquire a better future.

She was of the view that, oil palm is an exportable commodity which could bring the municipality huge benefits, including serving as raw material for local industrialist.

She entreat the beneficiaries pay equal attention to their oil palm plantation just as they did to cocoa as it was also a cash crop with huge potential to transform their livelihood.

She urged them to adopt modern method of farming and stress on the need to unite and work closely with extension officers, hence pledge the assemble support to enhance farming in the municipality.

The MCE before the commencement of the programme distributed hand sanitizers and nose masks to the gathering to observe anti COVID-19 laid down protocols.

The Municipal Director of Agric, Samuel K. Dzisah for his part reiterated govt’s commitment to improve agriculture in the Suhum municipality.

He indicated that, the department and the assembly are very determined to help farmers embark on a massive oil palm cultivation drive because of its comparative advantage for them.

He stated that the seedlings are of high quality and urged the farmers to adhere to the advice of the extension officers to ensure higher yields in the municipality.

Some beneficiary farmers in an interview, lauded government for the gesture, saying it will go a long way to support the export drive of the country and the municipality as well as improve their livelihoods.

They therefore pledged to take good care of the seedlings to attain the objectives of the laudable project to enhance productivity in the catchment.