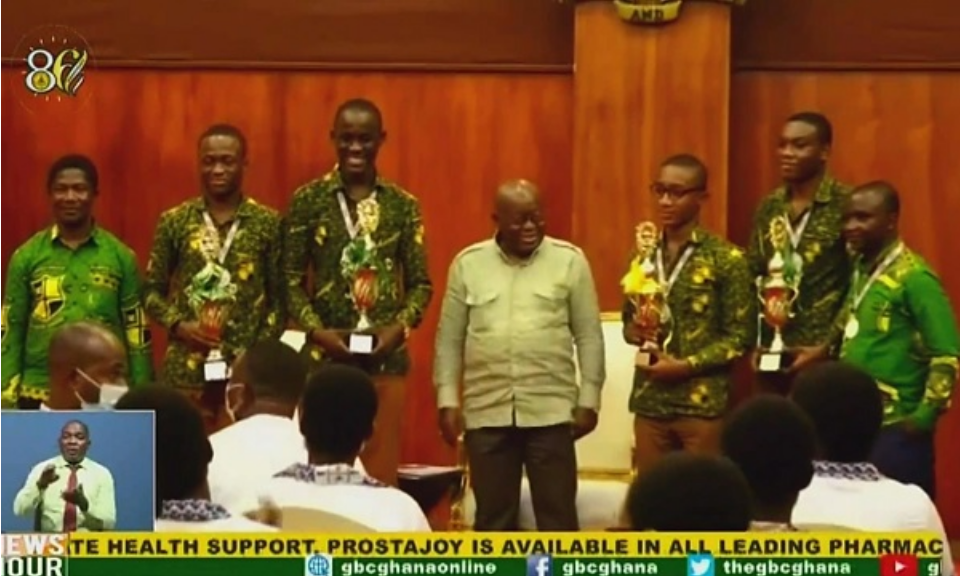 President Akufo-Addo has stated plans of establishing modern Science, Technology Engineering and Mathematics, STEM schools in all regions of the country.

The President stated this when students and teachers of Prempeh College and Mamfe Methodist Girls School presented their Robotic awards to him at the Jubilee House. He encouraged the students to be agents of change.

Mamfe Methodist Girls Senior High won the 2020 World Robotics and Coding Competition held in 12 Regional Zones across the world. The team is made up of first-year students from the Robotics Club in the school. The 5 girls beat 11 teams to reach the final and overcame Avenue World School based in New York, to emerge the World Best in the World Robofest Championship and the First Lego League National Competition.

This is the second time the school is achieving such a feat having won the 2019 Edition. Prempeh College won two local awards in Robotics at the Robotics Inspired Science Education, RiSE, and Robofest National Competition. Prempeh College also with a first-year student went on to pick 22 trophies at the Robofest International 2020 Competition. The Minister of Education, Dr. Yaw Adutwum was upbeat about the performance of the two schools.

”Mr. President, needless to say, that your investment is paying off. The Robotics group is the group that is building your STEM Centres. There are trainee teachers from around the countries, in readiness for the operation of the STEM countries. And as they dedicate to test the grounds and test waters and that Ghanaian children have to show. And even before the STEM centers are opened, they are real and ready for the work’’, the Minister said.

A student of Prempeh College David Nintang called on President Akufo-Addo to continue to give special attention to science and technology education.

‘’We believe STEM activities and competitions such as the critical innovation and challenges organized by Prime Time, create opportunities for students to apply creativity, knowledge and understanding of concepts studied to produce innovation, finding solutions to existing problems in Ghana. We believe the essence of Science is discovery, innovation, finding solutions to existing problems, making the world a better place. Mr. President, a wide range of perspectives will be needed to do that, ‘’the student said.

President Akufo-Addo said the talents of Ghanaian students will be enhanced through STEM.

‘’The people who began Silicon Valley were very young people at the time, not as mature as you are, and they have changed the way our world works, so you have the power, also to come and change the way Ghana works and change it for the better. I want to encourage you all to continue down this path and say that everything possible that the government can do to make sure that the STEM education in our country will take firm room’’, President Akufo Addo stated.

The Chief Executive Officer (CEO) of GIHOC Distilleries, Maxwell Kofi Jumah, has refuted allegations that President Nana Addo Dankwa Akufo-Addo has given him the Sefwi