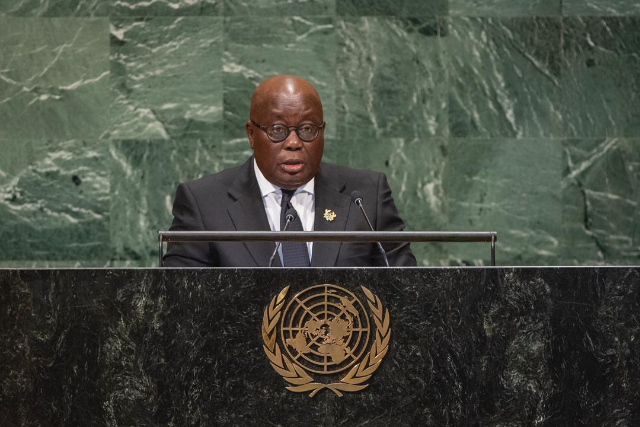 The President of the Republic, Nana Addo Dankwa Akufo-Addo, left the country on Thursday, 19th September, 2019, to lead Ghana’s delegation to the 74th Session of the United Nations General Assembly.

Whilst there, the President, as co-Chair of the Advocacy Group of Eminent Persons for the UN Sustainable Development Goals (SDGs), will participate in a series of SDGs events.

At the invitation of the President of Princeton University, deliver a public address at Princeton University on Friday, 20th September, 2019, and, also, at the invitation of Mr. Robert Barchi, President of Rutgers, he will deliver another public address at the Achebe Leadership Forum on 21st September, 2019.

President Akufo-Addo will also participate in, and deliver remarks at an event to be hosted by the US Corporate Council on Africa (CCA), celebrating the African Continental Free Trade Agreement (AfCFTA), and participate in a series of UN related side meetings.

The President will address the UN General Assembly on 25th September, 2019, and, thereafter, engage in another round of UN Meetings.

On Saturday, 28th September, 2019, the President will travel to Toronto to honour the invitation to participate in the celebration of the 25th Anniversary of the establishment of the Canadian branch of the New Patriotic Party.

President Akufo-Addo will return to Ghana on Tuesday, 1st October, 2019, and, in his absence, the Vice President, Alhaji Dr. Mahamudu Bawumia, shall, in accordance with Article 60 (8) of the Constitution, act in his stead.