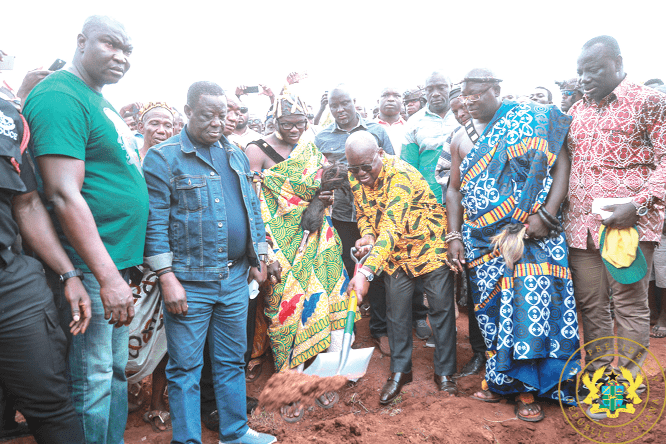 President Akufo-Addo Has Declared Next Year, 2020, As A Year Of Roads In A Bid To Improve The Road Infrastructure Across The Country

This was disclosed by the Minister of Roads and Highways, Kwasi Amoako-Attah when he addressed some communities in the Greater Accra Region assuring them their roads will see a massive facelift in the coming months.

Speaking at a durbar of Chiefs and People of Ga West, Ga North and Ga Central as part of the president’s tour of the Greater Accra Region yesterday, the Minister said road constructions are ongoing in various parts of the country in all 16 regions.

”I want to assure you that as you might have witnessed yourself, road construction is going on in earnest in all the 16 regions and in all the 260 districts. We have done a lot under the leadership of the president and we also must admit that we have more to do” he noted.

Mr. Amoako Attah added that government, as a matter of urgency, is attaching all urgency and seriousness to roads in the two leading cities of the country.

”Since assuming office, government of President Akufo Addo has been tackling the road network with all sincerity and with all seriousness. He is attaching great importance to every part of the country particularly, our 2 leading capitals. The capital of Ghana, Accra and Kumasi,” he stressed.

He further averred that ”Whiles working on roads everywhere, it is the determination of government that we give Accra its rightful place as the capital of our nation. That is why you see interchanges in many parts of Accra. That is why asphalt overlay is seen at so many places in Accra and that is why a number of bridges are being built in Accra. We are doing same in Kumasi and all other regional and district capitals will follow.”

The President is expected to inspect ongoing works, commission completed projects and cut the sod for new projects to commence, hold interactions with the Chiefs and peoples of the Region, as well as, interact with students and tutors at selected educational institutions.

The final day of the President’s 3-day tour will begin with an inspection of the railway track construction from Afienya to Ashaiman, Wednesday, December 4, 2019.

He is expected to cut the sod for the construction of a Sea Defense Project at Prampram, in the Ningo-Prampram constituency, and proceed to Tema East where he will meet and interact with clearing agents at the Tema Harbour.

The President will also visit the workshop for retrofitting and repairing of coaches in the Tema West constituency.