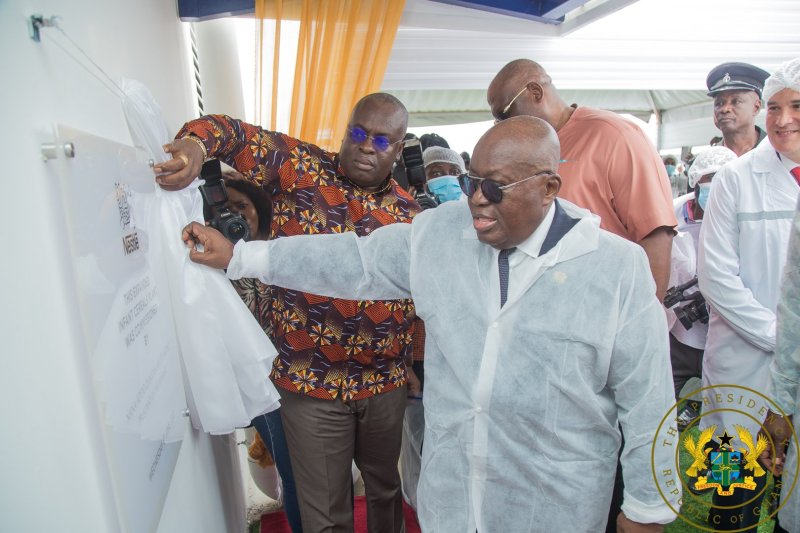 The plant, which belongs to Nestle Ghana Limited, a food and beverage manufacturing company, will produce infant cereal for the Ghanaian, West and Central African markets.

At an inaugural ceremony, President Akufo-Addo noted that the new plant that will expand Nestle’s Ghana’s production capacity by some 6900 metric tonnes “is a timely investment”.

He said Nestle’s evolution in the country, symbolized the commitment of the company to the growth and development of Ghana, adding that its (Nestle) successes should motivate others in the private sector to aspire to the heights of developing global brands.

The President emphasized that since 2017, his government had taken deliberate steps to refocus the investment priorities of the country and mobilize the resources necessary for the growth of priority sectors.

President Akufo-Addo pointed out that through the combined effect of the COVID-19 pandemic and Russia’s invasion of Ukraine have had a negative effect on the Ghanaian economy, such investment by a major multinational company like Nestle was a signal of the confidence of the global business community in the country’s economy, which is recovering to its pre-COVID-19 levels.

With the major challenge of Africa’s industrial development being fragmented markets, he called on manufacturers in the country to take advantage of the access to expanded markets created by the African Continental Free Trade Area (AfCFTA) agreement.

“West Africa’s population of some 350 million people and adoption of the ECOWAS trade liberalization scheme (ETLS) to create a regional market in ECOWAS have been re-enforced by the establishment of the African Continental Free Trade Area whose Secretariat is located in Accra and it represents a market of some 1.3 billion people will combine GDP of 3 trillion United States dollars.

“These regional and continental markets provide considerable opportunities for value-added products manufactured by entrepreneurs in Ghana, “ he said.

The President lauded Nestlé Ghana Limited for taking advantage of the expanded market opportunities offered by the AfCFTA.

Mauricio Alarcon, Chief Executive Officer for Nestlé Central and West Africa region, said the cereals plant will increase the local production of the company’s famous Cerelac brand for infants in Ghana, the rest of West Africa and Central Africa by 13,700 tonnes annually.

He said, as a business that has been operating in Ghana since 1957, Nestlé will continue to diligently contribute to the economy and serve as a model for other businesses to thrive.

Additional income opportunities for local farmers and suppliers in Ghana, in the region of Central and West Africa in guaranteed.