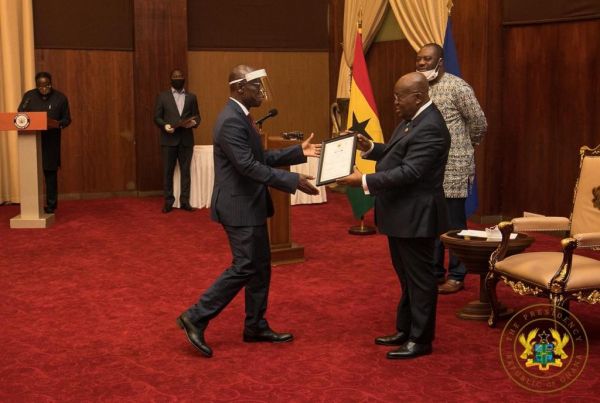 The President of the Republic, Nana Addo Dankwa Akufo-Addo, on Thursday, 28th May, 2020, presented presidential charters to the Pentecost University College, Accra, and All Nations University College, Koforidua, at a ceremony at Jubilee House, the seat of the nation’s presidency.

According to President Akufo-Addo, the presentation of the charters means that the two universities “are going to transition into autonomous Universities, with the capacity, now, to award their own degrees and diplomas.”

Delivering the remarks at the event, the President indicated that the country’s tertiary education system, like that of other nations, is composed of both public and private institutions, with the public universities established by Acts of Parliament, with presidential assents to award their own degrees and diplomas.

After going through rigorous accreditation and quality assurance processes of the National Accreditation Board, and based on a satisfactory recommendation by the National Accreditation Board, he stated “I am pleased to announce that Pentecost University College and All Nations University College have fulfilled these requirements, and are considered to be in a good position to manage their own affairs as fully-fledged tertiary education institutions.”

Additionally, the president said the two universities have been able to establish structures, which will enable their respective institutions to forge ahead with minimum supervision in the management of their academic programmes.

Having applauded Pentecost University College and All Nations University College for the solid work done over the last decade, President Akufo-Addo drew their attention to the fact that “a Charter may be suspended or revoked by the President on the recommendation of the Board; and the grant of a Charter does not relieve an institution of the obligation to operate only in facilities approved by the Board or to run only accredited programmes or courses.”

The President urged the Universities to bear in mind that they will be closely monitored, especially in areas of concern outlined by the National Accreditation Board.