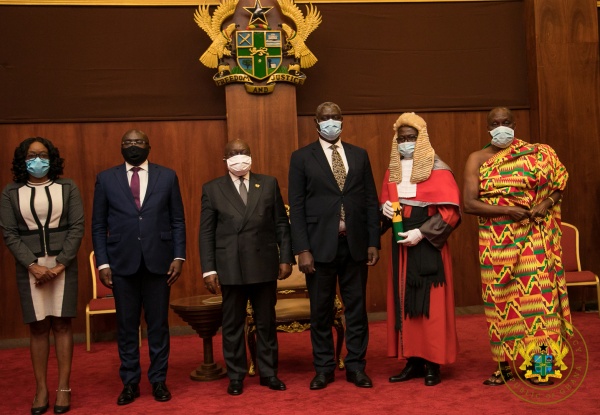 The President of the Republic, Nana Addo Dankwa Akufo-Addo, on Tuesday, swore into office Justice Professor Henrietta Mensa-Bonsu and Justice Emmanuel Yonny Kulendi as Justices of the Supreme Court.

Outlining the credentials of Justice Professor Henrietta Mensa-Bonsu, after administering three Oaths, the Oath of Allegiance, the Judicial Oath and the Oath of Secrecy, President Akufo-Addo described her as having stellar career in the worlds of academia and scholarship, female activism, international relations, public service and religious engagement.

“I am happy to be the President who swore her into office as a Justice of the Supreme Court. The appointment i have no doubt will help strengthen the development of the Court’s Jurisprudence and case law” President Akufo-Addo said.

With Justice Professor Mensa-Bonsu, being the 5th female member of the Court, the President stated that she has the pedigree for the high office she has assumed.

“You have met the stringent requirements of Article 128 clause (4) of the Constitution, and have exhibited the independence of spirit, proven integrity, high moral character, and impartiality of mind to hold this high office.”

Justice Professor Henrietta Joy Abena Nyarko Mensa-Bonsu, for her part said she will serve the course of Ghana and nothing else in her new role as a judge at the constitutional and Apex Court of Ghana.

“With our gifts of mind and strength of arm, whether night or day, in the midst of storm, in every need whatever the call may be, to serve thee, Ghana, now and evermore” Justice Henrietta Mensa-Bonsu, said she makes a pledge “that as always, i will devote my time and talents to her (Ghana) call and serve her (Ghana) to the best of my ability”.

At the swearing in of Justice Emmanuel Yonny Kulendi, the stated that the judicial independence is buttressed by the constitutional jurisdiction it exercises in the interpretation and enforcement of the Constitution.

The President used the occasion to remind them of the onus of responsibility which they carry in serving all Ghanaians with the justice they deserve and help protect the rights of all citizens in Ghana.

Parliament on the 20th of May 2020 approved the nomination of four (4) Justices of the Supreme Court. They are Justice Clemence Jackson Honyenugah, Justice Amadu Tanko, Mr. Yonny Kulendi and Prof. Henrietta Joy Abena Nyarko Mensah Bonsu.