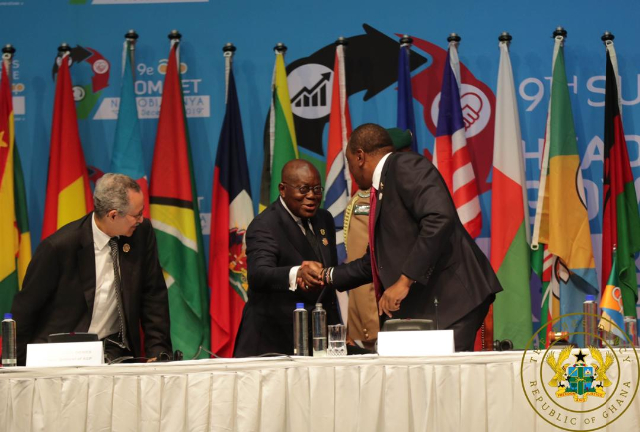 The President of the Republic, Nana Addo Dankwa Akufo-Addo, has urged the African, Caribbean and Pacific (ACP) Group of States to remain united, and fight for a fairer world economic order.

According to President Akufo-Addo, the rich nations of the world are not prepared for an equitable and fair-trading order, as a result of the desire for hegemony.

“We have, thus, to depend on ourselves, and continue to fight for a fairer world economic order,” he stressed.

The President made this known on Monday, 9th December, 2019, when he delivered an opening statement, on behalf of the Africa Group, at the 9th Summit of the ACP Group, in Nairobi, Kenya.

With the forebears of the ACP Group envisioning a set of objectives, including the promotion of closer trade and economic relations, and ensuring effective regional and inter-regional co-operation, he stated that the over-arching goal was to help realise a ‘new international economic order’, in which Member States were neither victims nor pawns.

“They believed that the strength of this Organisation would be determined not just by its numbers, but, more significantly, by the quality of its attachment to these objectives,” he said.

President Akufo-Addo continued, “Whilst our numbers may make us a formidable group in the world, the realities confronting our respective countries are those of guaranteeing accelerated, sustainable development, the effective integration of our economies into the high-end of the global value chain, and the eradication of poverty, inequality and marginalisation in our nations”.

He, thus, urged ACP Member States to strengthen their co-operation if they are to address these challenges successfully, adding that the reforms urgently needed in the multilateral arena, whether in trade or in peace and security, can be best effected if the Group remains united.

“The threats of climate change, the phenomenon of illegal mass migration, and the scourge of armed conflicts, terrorism and violent extremism can be met head-on and defeated if we act together,” the President added.

Citing the 2018 Report of the United Nations Conference on Trade and Development, President Akufo-Addo stated that it “makes for sobering reading, as the ACP Region is described as having a ‘fractured economic and trade structure’, with economies of member states over-reliant on the production and export of raw materials.”

He told the Summit that the time has come for ACP member States to turn over a new page in their economic history, commit themselves to forging more value-added activities, and hinge their relations on a substantial increase in trade and investment co-operation.

That, the President indicated, is the path to progress and prosperity.

With the coming into effect of the African Continental Free Trade Area (AfCFTA), having a market of some 1.2 billion people, with a combined GDP of some three trillion United States dollars ($3 trillion), President Akufo-Addo urged countries from the Caribbean and Pacific regions to take advantage of this new development to strengthen inter-regional co-operation and trade amongst the partners of the ACP.