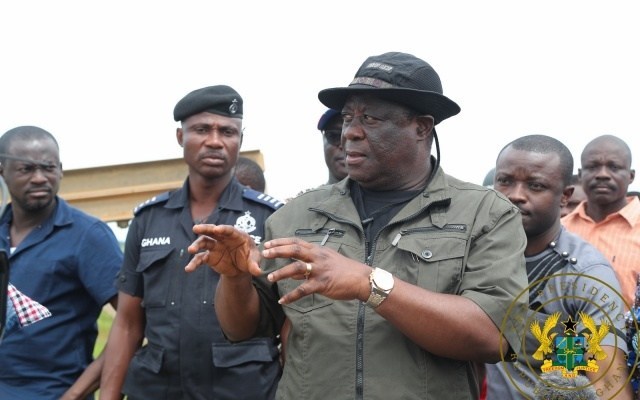 In efforts to ease vehicular traffic on our roads, the Minister for Raods and Highways, Kwasi Amoako-Atta on Friday commissioned two traffic intersections under the second phase of Accra Intelligent Traffic Management System (AITMS).

These two Signal Intersections Systems, are installed at the Kanda Highway/Castle Road and Starlet 91/Nationalism road, all in Accra.

Speaking to the press during the inspection in the presence of the Commercial Consular of the Chinese Embassy, Minister of Roads and Highways, Kwesi Amoako-Atta, indicated that, the new system have inbuilt mechanism to detect and manage congestion to ease vehicular traffic flow.

Explaining further, he disclosed that the two newly installed signals are part of the 253 traffic intersections being funded jointly by the Governments of Ghana and China.

The AITMS project according to Kwesi Amoako-Atta is one of the many steps government is taking to ensure free flow of vehicular traffic as the number of vehicles increases as well as enhance the key sectors of the economy.

Statistics from the Driver and Vehicle Licensing Authority (DVLA) he noted shows that, vehicular growth rate in Accra between 2015 and 2018 was between 12 and 15 per cent, which put pressure on the existing road infrastructure.

Personnel of the Motor Transport and Traffic Directorate of the Ghana Police Service he emphasized would not be required to direct vehicular traffic after the completion of the project unless an emergency occurs or a systematic failure is experienced.

To ensure safety on these roads, secret cameras would also be fixed at the various traffic intersections to monitor recalcitrant motorists who would jump red lights.