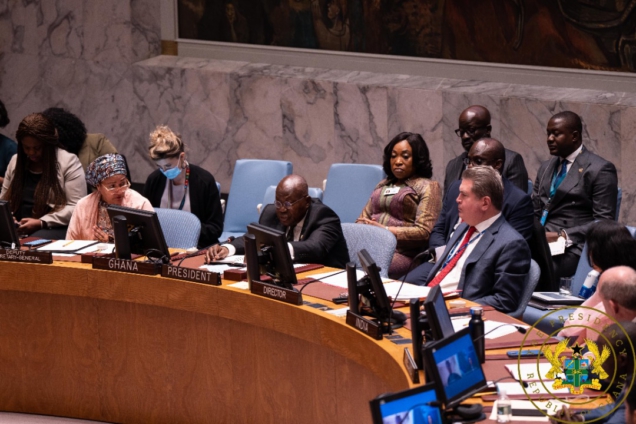 The President of the Republic, Nana Addo Dankwa Akufo-Addo, has charged the United Nations Security Council, which is the central mechanism of the United Nations for maintaining international peace and security, to support “adequate, predictable and sustainable financing of African-led operations”, in the global fight against terrorism.

Chairing a debate of the UN Security Council, as part of Ghana’s Presidency of the Council for the month of November, on Thursday, 11th November 2022, President Akufo-Addo stated that terrorism has always posed a danger to international peace and security, and continues to threaten peaceful co-existence between and within nations.

In Africa, the President noted that the Sahel, for example, with a population of some 300 million people, has accounted for the highest incidents of recorded terrorist attacks between January and June this year, which has resulted in some 5,412 deaths across Africa.

“Already, some Sahelian and West African countries have been overrun by terrorists and other armed groups, who now feel motivated and emboldened to expand their reach of influence to the coastal countries of West Africa, in a grand attempt to get access to the high seas, and create a vicious linkage between terrorism and piracy,” he said.

To this end, President Akufo-Addo noted that the international community, particularly the Security Council, cannot choose to be neutral in the design and implementation of specific responses required to confront the threat of international terrorism.

“We acknowledge that the fight against terrorism can be a protracted one that could take several years, but, with collective efforts, terrorism and those behind its evil acts can and will eventually be defeated,” he added.

In proposing solutions to curb the menace of terrorism in Africa, President Akufo-Addo, first, noted the importance of leveraging the role of the African Union and its regional economic commissions in raising a robust and resourced force to confront the terrorists and other armed groups, alongside other peace operation initiatives, and appealed for the support of the Council for such efforts.

“Secondly, the burden of confronting terrorism cannot be borne by those in the region alone. It requires strong collaboration between the United Nations, the African Union and the regional economic communities, especially ECOWAS, to address the question of adequate, predictable and sustainable financing for regional-led operations,” he said.

President Akufo-Addo continued, “The African Union has demonstrated its commitment and capacity to manage effectively such financing and to comply with the required human rights standards in such operations. This Council and the wider international community must play their part if there is a desire to have continuing relevance.”

Lastly, the President told the Council that the structure and approach of international support to countering terrorism, including in the Sahel, has to be pre-emptive, rather than reactive.

“There is the need, therefore, for the Council and the wider international community to address the underlying drivers of the instability through the building of resilience in conflict-prone regions, including in the areas of promoting democratic values, development and state services,” he said.

President Akufo-Addo stressed that international support must be placed fully behind deliberate interventions to promote inclusive governance, and the extension of effective State authority in several parts of African territories in order to meet the expectations of our largely youthful populations, who, in some instances, have fallen victim to the radicalized messages of extremists.

“I would strongly urge members of the Council to revisit the vexed issue of the reform of the United Nations system, especially of the Security Council, and to do so on the basis of the African Common Position on UN Reform, as enunciated in the Ezulwini Consensus, if, indeed, the authority of this Council which, in recent times, appears to have been devalued, because of its anachronistic structure, is to be restored,” he added.