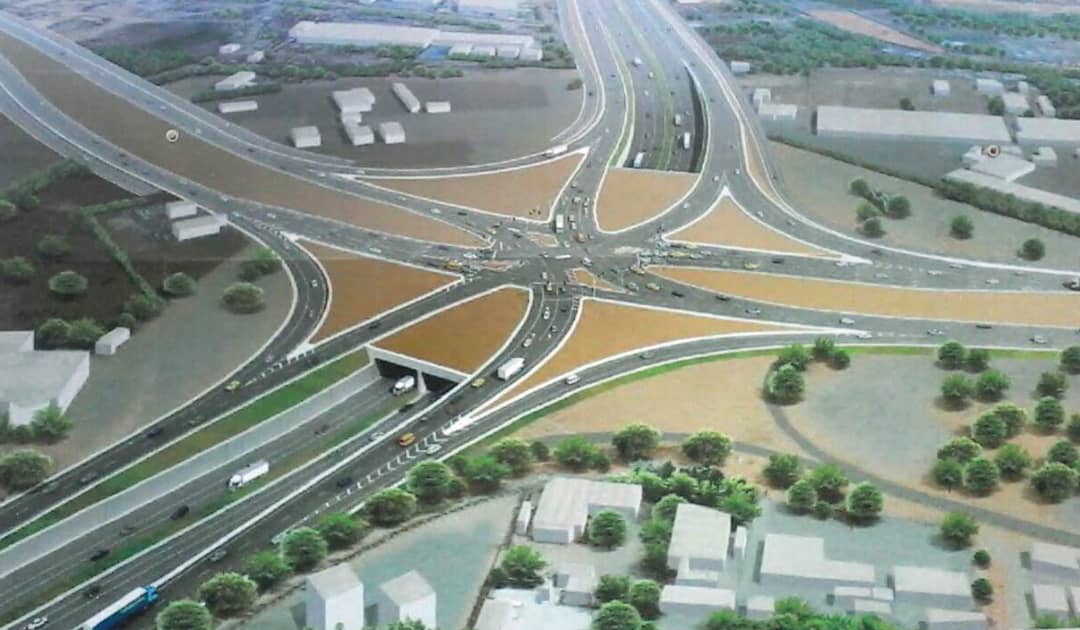 Established in 1962, the industrial City of Tema has seen increasing social and economic activities over the past five (5) decades. The growth in Tema has increased significantly. While development in the City is a positive indicator on Ghanaian Economy, the socioeconomic activities resulted in a significant increase of daily vehicular traffic during peak hours at the Motorway roundabout which also connects Nigeria and Togo through Aflao.

For these reasons, it was important for the Motorway roundabout to see a face lift to accommodate current and future traffic volumes.

The Government of Ghana led by Nana Addo Dankwa Akufo Addo signed an agreement with the Japanese Government with a grant through the Japan International Cooperation Agency (JICA), for the construction of the three-tier interchange at the Tema end of the Accra-Tema Motorway.

The Vice-President, Dr Mahamudu Bawumia, on July 18, 2018 officially cut the sod for the construction work to begin and completed within 28 months.

The $60-million interchange is to replace the roundabout to ease traffic on the Accra-Aflao highway and the Tema- Akosombo road which intercept each other at the Tema Motorway roundabout.

The project involved detailed engineering and reconstruction of the roundabout into an interchange by the Contractor ‘Shimizu-Dai Nippon Joint Venture (SDJV), with CTI Engineering International Co. Ltd as consultants’.

The project under the West African Corridor Development Growth Ring Master Plan implementation, engaged about 400 workers under the project, in addition to those who supplied materials.

Phase-One of the project saw the construction of an underpass in the Accra-Aflao direction; a signalled intersection at the middle level of the interchange; and four (4) pedestrian bridges as well as drainage, ramps, service roads, and provision of adequate Road Safety furniture to safeguard lives and properties.

The project’s overall goal is to contribute to the growth of the country’s economy and others in the West African sub-region.

Phase one of the newly constructed Tema Motorway Interchange was officially opened to vehicular traffic on Saturday, 16th May 2020.

Officers from the Motor Traffic and Transport Department of the Ghana Police Service were spotted Monday morning at the newly built interchange to direct and aid motorists to familiarise themselves with the complex nature of the interchange.

Some of the Drivers Net 2 TV spoke to on Monday morning were happy with the flow of traffic.

According to the Ministry of Roads and Highways, directional animations will subsequently be broadcasted on all TV channels across the nation to guide motorists and pedestrians.

Phase-two of the project is set to commence soon which comprises the construction of a flyover on the Akosombo-Tema Harbour Road.