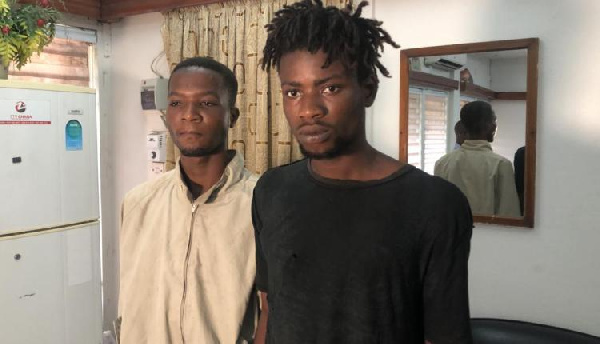 The Tema Regional Police Command has busted two suspects who notoriously rape and robbed within the Ada Foah area.

Investigations revealed that on 28/08/2019, Mohammed Dakeh, lured a 21-year-old Nigerian to the abandoned building and together with his accomplice, gang raped the lady and forcefully took her purse containing an amount of GHC 400.00 and an Infinix Mobile Phone.

A statement signed by Regional Commander DCOP Oyirifi Akrofi Edward Johnson and copied to Oman FM said further investigations also revealed that on 30/08/2019, the same suspects lured another Nigerian lady to the same location, gang raped and robbed her of her Huawei mobile phone and an amount of GHC 100.00. On 5/09/2019, Mohammed Dakeh and Petiafor Abraham again arranged and met another Nigerian lady, gang raped her, robbed her of her belongings and abandoned her to her fate.

On 6/09/2019, the suspects again invited another Nigerian from Ashaiman, in an attempt to perpetuate their heinous crime once again.

Luck, however, eluded them when the lady who was invited happened to be a sister to one of their victims.

She informed her sister, who in turn alerted police.

According to the statement, police went in to arrest Mohammed whiles Abraham managed to escape.

Mohammed later led police to the hideout of Abraham, where he was arrested.

“The Command is inviting the general public, particularly, ladies who have fallen victims to such circumstances to the Ada Divisional Command, on Friday, September 13, 2019, where an identification parade will be conducted for victims to identify their attackers,” the statement said.