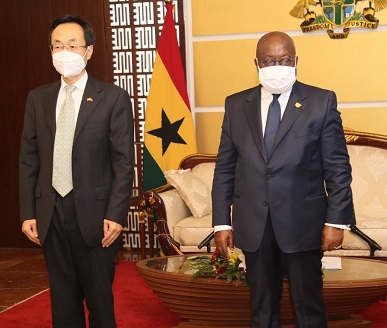 President Nana Addo Dankwa Akufo-Addo yesterday bade farewell to the Chinese and Australian envoys, Shi Ting Wang and Andrew Barnes respectively, as they end their duty tour of the country.

At a short ceremony at the Jubilee House, the President was full of praise for the outgoing Chinese ambassador for his sterling performance during his short stay in the country.

The ambassador is credited for facilitating several high-profile visits to China, including that of Foreign Minister Shirley Ayorkor Botchwey, Vice-President Dr. Mahamudu Bawumia and President Akufo-Addo himself.

It was during Shi Ting Wang’s duty tour that the Chinese Vice-Premier, Ms. Sun Chunlan, visited Ghana and later the signing of the Sinohydro deal between Ghana and China, as well as the signing of a deal for the construction of the James Town fishing harbour and several landing sites in the country took place.

As a result, President Akufo-Addo said “so much has happened in our relations with China largely because of you. You have proved to be a strong and dedicated friend of our country, so we all have to be sad that such a good friend of ours is leaving our shores.”

That, he said, was the reason his recall back home came to him as a surprise since he was expecting him to stay a bit longer than the two years.

In view of that, the President said “apart from the normal gifts that we give to departing diplomats, in your case, we have an additional exceptional gift to it for you to see exactly how much we have appreciated you and your stay in the country.” He wished the ambassador good luck in his endeavours.

The outgoing ambassador could not help thanking the President for his kind words and the government and people of Ghana for the warm reception and support given him during his duty tour.

“Our relations have been further strengthened facing the challenge of Covid-19; we have supported each other and have cooperated very well.  At the beginning of this year, when China was in difficulties, you gave us a lot of support. You are one of the first Presidents to write a letter of solidarity to our President. Now, in return, we have also given you a lot of support,” he said.

He, therefore, expressed hope that the world would soon overcome the Covid-19 pandemic.

On his part, the outgoing Australian High Commissioner to Ghana, Andrew Barnes, said he equally enjoyed every bit of his four-year stay in Ghana and commended government for its handling of the Covid-19 pandemic.

President Akufo-Addo congratulated him and wished him Godspeed and best of luck in his next assignment.