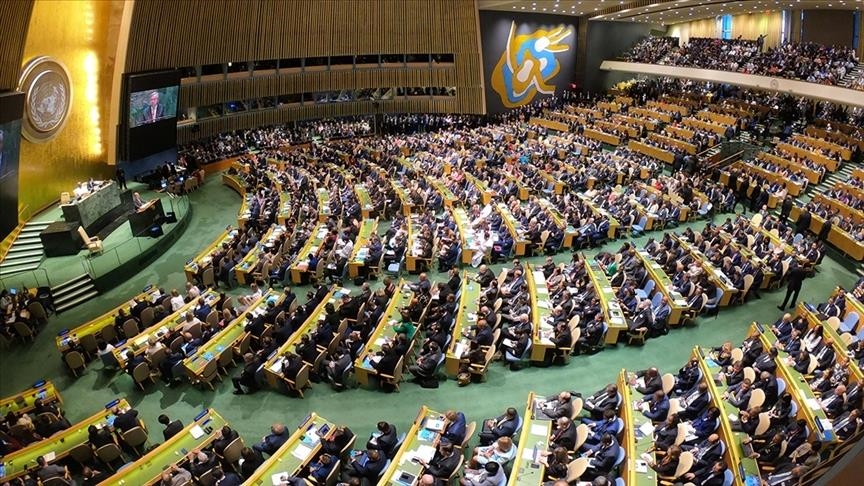 The resolution was supported by 143 countries, while 35 states – including China and India – abstained.

Although symbolic, it was the highest number of votes against Russia since the invasion.

Last week, in a grand ceremony in the Kremlin, President Vladimir Putin signed documents to make the eastern Ukrainian regions of Luhansk, Donetsk, Zaporizhzhia and Kherson part of Russia.

The agreements were signed with the Moscow-installed leaders of the four regions and came after self-proclaimed referendums in the areas that were denounced as a “sham” by the West.

The resolution calls on the international community not to recognize any of Russia’s annexation claims and demands its “immediate reversal”. It welcomes and “expresses its strong support” for efforts to de-escalate the conflict through negotiation.

The countries which voted with Russia all have a longstanding stance of criticizing Western governments.

Belarus is considered a satellite state of its neighbour and ally, and its territory was used in Moscow’s invasion of Ukraine in February.

As well as China and India, which have attempted to remain neutral on the conflict, parties that abstained from the vote included 19 nations in Africa.

Many African countries have avoided taking sides in the war – which has been seen as a reflection of efforts to maintain longstanding trade ties, or of historic non-alignment policies.

Three of four states that were visited by Russian Foreign Minister Sergei Lavrov in July – Congo-Brazzaville, Ethiopia and Uganda – chose to abstain.

Meanwhile, all four nations that featured on a recent trip by Ukraine’s own foreign minister – Ghana, Ivory Coast, Kenya and Senegal – voted at the UN to condemn Russia.

Dmytro Kuleba made his tour in an apparent effort to counter Russian influence in Africa, although he cut short his visit after major Ukrainian cities came under missile fire on Monday.

Ukraine’s President Volodymyr Zelensky said he was grateful to the countries that did support the resolution.

“The world had its say – [Russia’s] attempts at annexation is [sic] worthless and will never be recognised by free nations,” he tweeted, adding that Ukraine would “return all its lands”.

US President Joe Biden said the vote sent a “clear message” to Moscow.

“The stakes of this conflict are clear to all, and the world has sent a clear message in response – Russia cannot erase a sovereign state from the map,” he said.

Dame Barbara Woodward, Britain’s ambassador to the UN, said Russia had failed on the battlefield and at the UN, adding that countries had united to defend the world body’s charter.

“Russia has isolated itself, but Russia alone can stop the suffering. The time to end the war is now,” she said.

The General Assembly vote was triggered after Russia used its veto power to prevent action at the Security Council – the body in charge of maintaining international peace and security. As permanent members, China, the United States, France and the United Kingdom also hold vetoes on the council.

There have been calls for Russia to be stripped of its veto power after the Ukraine invasion.