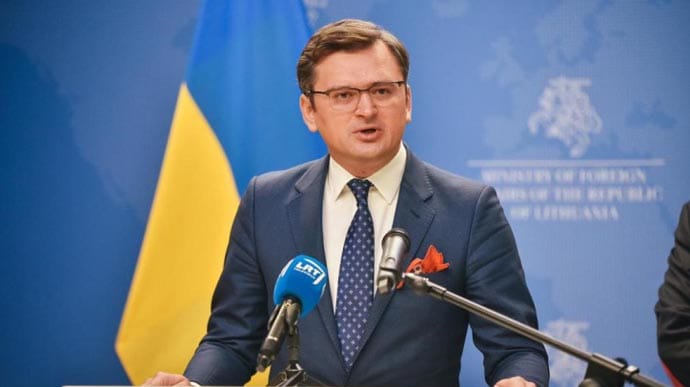 Russia launched dozens of “kamikaze” drones on targets in Ukraine on Monday, striking energy and civilian infrastructure and killing at least eight people.

Ukraine said the attacks were carried out with Iranian-made Shahed-136 drones. Tehran has denied supplying the drones.

Unlike drones that return to base once missiles are launched, “kamikaze” drones are destroyed in an attack.

“Given the amount of destruction Iranian drones have caused to Ukrainian civilian infrastructure, the deaths and injuries caused to our people, as well as … the possible continuation of Iran’s supply of weapons to Russia, I submitted a proposal to break off diplomatic ties with Iran to the Ukrainian president,” Dmytro Kuleba said in a video posted on Facebook Tuesday.

Kuleba said Kyiv was certain they were Iranian and would be ready to share a “bag of evidence” with any European powers that had doubts.

“Tehran bears full responsibility for the destruction of relations with Ukraine”, Kuleba told a news conference.

“Kamikaze” drones, which are also called “loitering” munitions, can hover above an area to identify a target before diving to destroy it.

Like cruise missiles, they can hit targets hundreds of kilometres away, but whereas cruise missiles are relatively expensive, “kamikaze” drones are a cheaper, yet precise, alternative.

Kuleba said he had urged the European Union to impose sanctions on Iran “for helping Russia to kill Ukrainians”.

“Severe sanctions against Iran are especially relevant right now, as we are witnessing reports on Iranian intentions to give Russia ballistic missiles to be used against Ukrainians,” he said.

“The actions of Iran are vile and deceitful. We won’t suffer them, because all those actions were done while Iran told us that they didn’t support the war and won’t support any of the sides with their weapons.”

There was no immediate Israeli response to Kuleba’s remarks.

Earlier on Tuesday, a member of Israel’s decision-making security cabinet, Minister of Justice Gideon Saar, told national broadcaster Army Radio, “Our support for Ukraine does not include weapons systems and weaponry – and there is no change to that position.”

While Israel has condemned the Russian invasion of Ukraine and provided Kyiv with humanitarian relief, it has stopped short of also providing military support, citing concern for continued cooperation with Moscow over the war in Syria.

Last month, Zelenskyy announced that the accreditation of the Iranian ambassador was revoked due to Russian forces using Iranian drones to attack Ukraine.