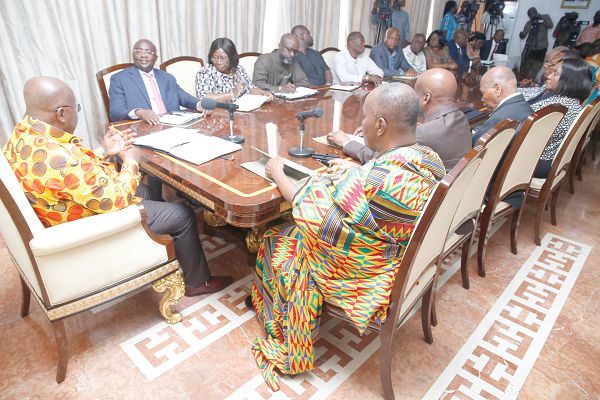 Unease at Council of State

Members of the Council of State have been expressing worry over what they describe as subtle attacks on the entire membership of the Council in the media, following the closure of a finance house owned by one if its members.

Ideal Finance Ltd, which belongs to Dr Nii Kotei Dzani, was named in the latest round of closures of financial institutions by the Bank of Ghana (BOG) as part of its ongoing major reform of the country’s financial sector.

The BoG revoked the licences of Ideal Finance Ltd and 23 other savings and loans and finance houses on grounds of insolvency.

The members of the Council, who spoke to this paper said they were very disturbed by the lack of nuance in media discussions and reportage on the matter. There is often no separation of the individual who owned the finance house (Dr Nii Kotei Dzani) from the Council.

The Council of State as a whole has, as such, come under attack and its members have been the target of aspersions despite the fact that Dr Nii Kotei Dzani, run his finance house as a private citizen and independent of the Council of State.

The other members of the Council feel that they have distinguished themselves in different fields and that the private affairs of one person who was not a nominee of the President or appointed by the President but rather an elected member should come to affect the general image of the counsel.

Dr Nii Kotei Dzani was voted by the Greater Accra electoral college to be their representative on the Council of State.

Some members of the council have been meeting and discussing how to approach the issue which they feel is very sensitive and warrants that the erroneous reportage is corrected.

On Friday 16 August 2019 the BoG revoked the licenses of 23 insolvent savings and loans and finance house companies, including Ideal Finance Ltd as part of a process of reform which began years ago.

In August 2017 BoG revoked the licences of UT Bank Ltd and Capital Bank Ltd and approved a Purchase and Assumption (P&A) transaction with GCB Bank Ltd that transferred all deposits and selected assets of the two banks after they were found to be deeply insolvent.