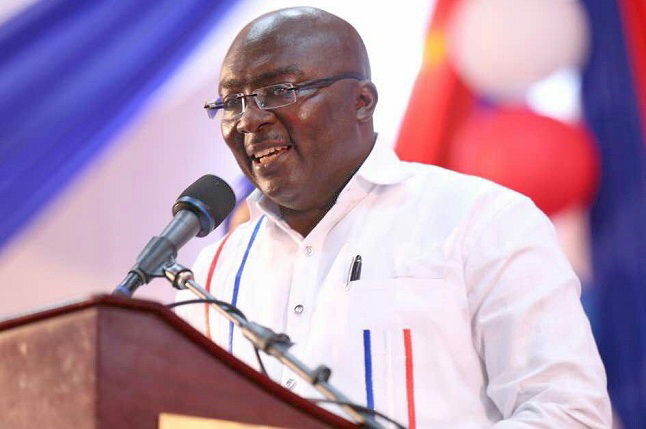 Vice President Dr Mahamudu Bawumia Thursday assured residents of Agbogbloshie and Old Fadama of Government’s resolve to provide social amenities that can match up with any urban community in the Greater Accra Region.

Successive governments have failed to provide those amenities because they regarded the settlements as illegal and thus, made several attempts to evict occupants from the area.

However, Vice President Bawumia, while addressing residents of the twin communities at Agbogbloshie Community Centre on Thursday, said the Akufo-Addo’s Government would begin a paradigm shift of development by making sure the people there receive equal share of the national cake.

In that regard, he said, Government would soon start constructing 32 community toilet facilities (eight unit block), 80 community bath houses (four-unit block), re-construct the old community centre, which was razed down by fire into a modern storey building and kindergarten facilities in the area.

Other amenities that would be provided within the shortest possible time in the area include new police station and street lightning system to enhance security at night.

Vice President Bawumia announced that 2,000 head porters, popularly referred to as “Kayayie” in Agbogbloshie and Old Fadama would receive employable skill training and seed capital under the National Entrepreneurial and Innovation Programme so that they would be self-reliant with the ultimate goal of alleviating poverty in the two deprived communities.

“We are here to solve your problems. The livelihoods of Agbogbloshie and Old Fadama matter like those living in Cantonment and East Legon and so your needs are equally important as those in developed communities,” he assured.

Agbogbloshie and Old Fadama are dominantly inhabited by migrants from northern parts of Ghana, comprising 16 different tribes including Dagombas,Kokombas,Frafras,Mamprusis,Momobas,Kusasis and Nanumbas.

The twin communities were created in the early 1980s with about 20,000 inhabitants, but over the years, the sprout of urbanization had increased the population to about 120,000.

Vice President Bawumia maneuvered to the interior part of the community, which some elderly residents of the area considered it as historic because most of the previous high profile personalities like the sitting President or Vice President only visited the periphery of the area, and therefore they failed to appreciate the needs of the people.

They set sound systems at vantage points of the community with some popular party songs blaring loudly, thus attracting many old and young people to the place, dancing and cheering.

Some NPP supporters and sympathizers were also seen wearing Party T’-Shirts and holding party paraphernalia of red,blue and white beaming with smiles.

Vice President Bawumia was accompanied by some Ministers of State and NPP National and Regional Executive including Dr Mustapha Abdul Hamid, Minister of Zongo and Inner-City Development, Hajia Alima Mahama,Local Government and Rural Development, Mr Dominic Nitiwul,Minister of Defence and Mr Ambrose Dery, the Minister of the Interior.