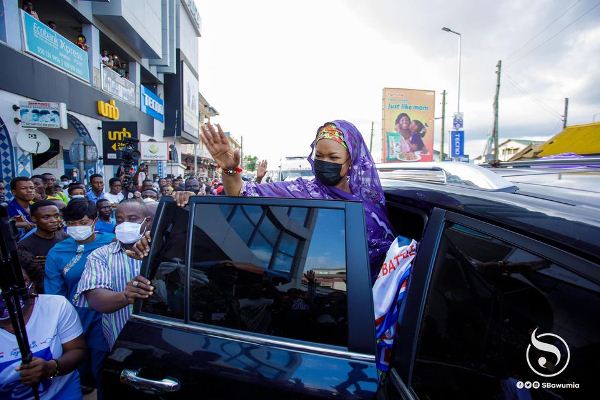 Second Lady Samira Bawumia has stated that the level of development in the eastern region especially in the Zongo community’s is not commensurate with the enormous support the National Democratic Congress (NDC) enjoyed from the people of the Region when they were in power.

She noted that the NDC has taken the support of the people of the region for granted and thus should be rejected in the December polls.

The Second Lady is in the Eastern Region to commence a five-day campaign tour for the New Patriotic Party, interacting with the chiefs, opinion leaders, market women, artisans and the youth especially those from the Zongo communities.

She visited districts and communities to urge them into the fold of the New Patriotic Party to enable them win the 2020 General Election.

Samira Bawumia received a rousing welcome from the sympathizers of the NPP at Ayekotse Zongo in Suhum where she addressed a durbar of Zongo Chiefs,women and youth leaders.

She was welcomed on arrival by regional NPP executives and supporters amid chanting of party songs and jama with slogan 4more 4nana to do more.

Earlier, she had paid a courtesy call to the chief of Suhum, Osaberima Ayeh Kofi to pay her respects and compliments.

The chief of Suhum OSABERIMA AYEH KOFI, in his address lauded the NPP government for their good policies for Ghanaians.

Hajia Samira Bawumia in her interaction with the Suhum Zongo chiefs, appealed to them to vote in the December 7 polls to retain the NPP in power to continue its good works.

She said when you go round the region, you can see the development that is ongoing, the people are happy with the government of Nana Addo Dankwa Akufo-Addo. They’ve seen development unprecedented in the first term of any government.

The NDC has taken the eastern Region for granted, they didn’t give them the development that they need and deserve and Nana Addo Dankwa’s government has done just that.

The Suhum Zongo chief Alhaji Gariba Abubakar for his part enumerated some policies that the zongo communities in Suhum have benefited under NPP government and applauded the NPP government for their good policies.