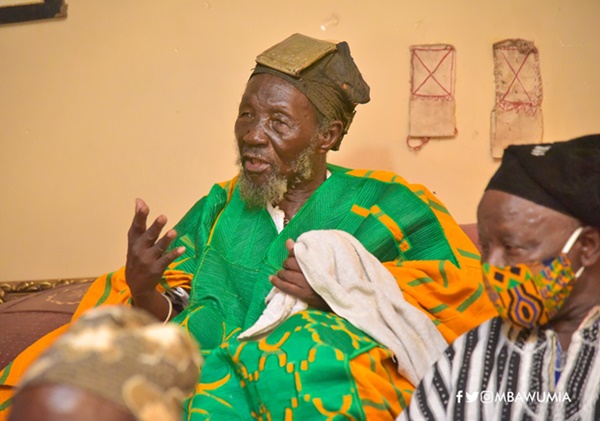 We’re Proud Of You – Overlord Of Mamprugu Praises Veep

The Overlord of Mamprugu, Naa Bohagu Mahami Abdulai Sheriga, has expressed the heartfelt appreciation of the people of Mamprugu and the entire nation to President Nana Addo Dankwa Akufo-Addo for appointing, for the fourth time, Dr Mahamudu Bawumia as his running mate ahead of the 2020 general elections.

The Nayiri has also congratulated the Vice President, who hails from Kperiga in the Mamprugu kingdom, for chalking the unprecedented feat of being selected four times in a row as running mate, and making the sons and daughters of Mamprugu and the entire northern Ghana proud.

“Just about a week ago, I had the information that H.E. President Akufo-Addo had appointed you (Dr Bawumia) to partner with him for the 2020 election as running mate for the fourth time. I wish on my own behalf and on behalf of Mamprugu, to congratulate you for this feat.

“You have indeed made Mamprugu proud. We in Mamprugu cannot but wish you God’s guidance, protection, and above all success in this endeavour, the Nayiri stated on Friday, July 3, 2020 when the Vice President called on him at his palace in Nalerigu after registering for the new Voter ID card earlier in the day.

“Let me pay glowing tribute to the President of the Republic, H.E Nana Addo Dankwa Akufo-Addo for endorsing my own son of this great kingdom the fourth time as his running mate. The people of Mamprugu are very grateful to you and your party,” Naa Bohogu Mahami II stated.

The Mamprugu overlord commended the Akufo-Addo government for its “stellar performance,” which has led to major transformations in the lives of Ghanaians.

“From where I sit, I observe with great admiration, the stellar performance of the NPP government which has won the hearts of many Ghanaians and the world at large… I would like to talk about a few of your projects and pro-poor social interventions that have been carried out in my jurisdiction and Ghana at large.

“The tarring of the Nalerigu, Gambaga and Walewale town roads, Nalerigu to Gbintiri road which is still under construction, the water project within Nalerigu, Gambaga and Chereponi all within the North East Region has all been completed and the people of these communities can now boast of good and potable drinking water in their homes.

“The Free SHS policy, the School Feeding programme, the Planting for Food and Jobs, One Village One dam initiative, one constituency one ambulance, the creation of of jobs are all evidence of your great performance. On behalf of the chiefs and people of Mamprugu, I wish to once again register our sincere appreciation and gratitude to you and your government for the good work.”