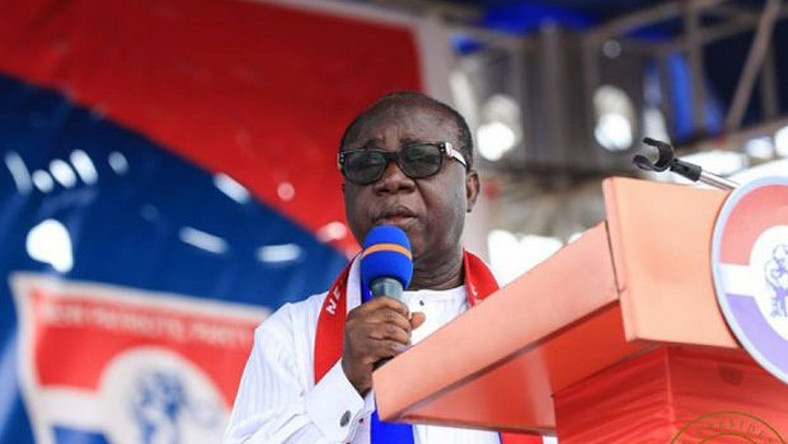 The National Chairman of the New Patriotic Party  has held a maiden zoom meeting with the Party’s Regional Chairmen with a call on them to work hard to ensure victory for the party in the December polls.

The digital meeting forum afforded the National Chairman the opportunity of receiving firsthand reports from his Regional Chairmen on the ongoing new voters’ registration exercise across the Regions.

The Volta Regional Chairman of the Party, Mr. Makafui Kofi Woanya , in giving his account of the measures put in place by his team to ensure vigilance at the boarders, expressed worries about the consistent attempt by the opposition NDC to smuggle non-Ghanaian citizens from neighboring Togo to register.

Sighting few examples of how groups being transported in buses by the NDC were detected and handed over to the security services.

He commended the security services for their quick response in preventing such illegalities and maintaining sanity at the various polling stations. Mr. Woanya was confident that with the new voters’ register being compiled, the NDC would find it difficult to manipulate the election results in the Volta Region as has been the practice over the past general elections. He was also confident that with the great development interventions by the Akufo-Addo-led NPP government, the Party executives in the region are working hard to secure about three parliamentary seats for the Party in the upcoming December polls.

The Greater Accra Regional Chairman, Mr. Divine Otoo on his part expressed excitement about the registration figures of over 1.5 million registered voters so far in his region.

He mentioned that the registration exercise was going on smoothly except for a few flashpoints where the NDC loyalists attempted to ferment troubles but due to the timely interventions of the security agencies, law and order was restored.

There were equally similar reports by the Regional Chairmen from Bono, Bono East, Ahafo, Upper West and Western Regions. The Upper East Regional Chairman, who doubles as the Secretary to the Regional Chairmen’s Caucus, Lawyer Anthony Namoo, expressed much appreciation to the party’s rank and file who have in diverse ways supported his region towards a successful registration exercise so far.

The Regional Chairmen sharing boarders with the Ashanti Region expressed their uttermost gratitude to their colleague Regional Chairman, Chairman Wontumi, for the financial and logistical support he has provided them to aid them conduct their monitoring and vigilance more effectively. They also thanked the National Party Office for the supports provided to all the Regions for their coordination of the grassroots mobilization towards the new voters’ registration exercise across the country.

The National Chairman was pleased with the Regional Chairmen’s participation and contributions to the meeting. “I am deeply touched by the amount of sacrifices being made by all of you in galvanizing the Party’s grassroots and providing some assistance to qualified Ghanaian citizens in undertaking their constitutional right to register and vote in the December 2020 general elections”.

He commended them for holding the forth in their respective Regions to ensure that the country goes into the upcoming general elections with a credible voters’ register.

“I am equally encouraged by the cooperation you continue to offer agencies of state in realizing the main purpose for which the nation is embarking on compiling a new voters register”.

The National Chairman urged all the Regional Chairmen to work harder in the next three weeks to whip up more interest in the EC’s new voters’ registration exercise across their regions and ensure all NPP supporters and admirers who are qualified to register, do so observing all the COVID 19 safety protocols.

Following ongoing efforts by the Chief of Staff and the National Party to foster reconciliation among successful and unsuccessful contestants and their supporters from the Party’s Parliamentary Primaries, the meeting also discussed how the respective Regional Chairmen are complimenting these efforts towards mending relationships and forging a united front against apathy for victory 2020.

The National Chairman further observed that with over 7 million voters registered so far, it is clearly indicative that Ghanaians are preparing to determine the leader they have the most confidence in during the December polls, particularly during these times where COVID 19 poses a huge threat to the country’s economic growth and prosperity of the Ghanaian people.“Undoubtedly, this global pandemic with severe impacts across nations, is certainly the first of its kind any government in Ghana has had to deal with. Yes! there have been challenges with the management of the pandemic, and maybe sometimes a few mistakes by individuals and even the experts advising the President.

However, despite the constraints, the fight against COVID 19 has so far been very well sustained and managed by President Akufo Addo and his government.”

The National Chairman, Freddie Blay  called on the Regional Chairmen to encourage their respective communicators to intensify public awareness on the COVID 19 protocols, bearing in mind that irrespective of the several policy interventions by any government in Ghana to limit the spread, its containment can only be achieved if we all as Ghanaians comply with government directives and the personal safety protocols for COVID 19.

“Obviously, it does not serve the interest of the Party and government to be burdened with the management of increasing COVID 19 cases and deaths. Such a situation has the potentials of shading some of the gains of the Nana Addo-led NPP government and equally increasing government’s spending on the pandemic over a longer period.

Therefore, the fight against the deadly virus must continue unabated by all citizens as we go about our normal lives as individuals and as a nation”.