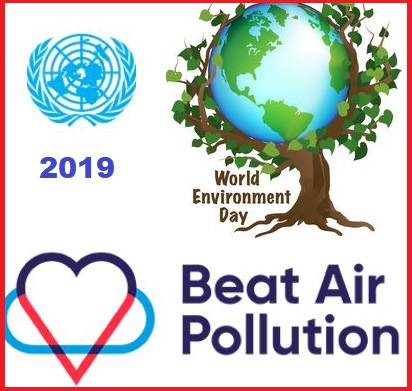 Air pollution is caused mainly by many human activities which include the indiscriminate use of agricultural chemicals, activities of industries, the emission of greenhouse gases and hydrocarbons to the atmosphere by the burning of fossil fuels, the burning of fuels by most machines, the continued smoking, the emission of Chlorofluorocarbons (CFCs) from compressed cans and sprays, activities of illegal mining, among others.

Figures from the World Health Organization (WHO) reveals that air pollution kills an estimated 7 million people worldwide annually. The WHO also estimates that about 4.2 Million deaths occur every year as a result of exposure to ambient (outdoor) air pollution whiles 3.8 Million people die every year from household exposure to smoke from dirty cookstoves and fuels. Human activities has endangered the air to the extent that almost 91% of the world’s population live in places where air quality exceeds WHO guideline limits with about 9 out of 10 people worldwide breathing polluted air.

The WHO and other international bodies have warned that more people stand the risk of dying from diseases related to air pollution for as long as humans do not address the harmful effects that their activities pose to the environment.

In Ghana, the situation of air pollution is not different. Despite the many education and monitoring activities put in place, people still continue to engage in activities that are causing more danger to the environment. Available statistics from the WHO discloses that annually, air pollution related illnesses kills approximately 28,000 people in Ghana and this number is expected to rise. This has been attributed to the rapid increase in urban population and vehicular numbers and the indiscriminate manner by which humans engage in the burning of all forms of toxic waste. A good example is the indiscriminate burning of e-waste at the Agbogbloshie dump site in Accra by scrap dealers, which has become a haven of air pollution in Accra.

Pregnant women and children, the most vulnerable in the society, suffer the most from breathing problems, chronic diseases, increased hospitalization, and premature mortality.

The human population is therefore at risk requiring effort from government and all individuals in the fight against air pollution.

On this year’s World Environment day, which is marked with the theme “Beat Air Pollution”, it is important that we become very conscious of our activities that endanger the environment. Let us all put in the best effort to minimize our activities that endanger the environment such as the indiscriminate burning of all forms of waste, excessive use of agro-chemicals, emission of toxic from cars, exposure to dust, among others, to have a prolonged and enjoyable life.

The achievement of this goal requires the enforcement of existing laws on environmental management which should mostly target the removal of vehicles which do not meet emission standards from the streets of Ghana.

There must be a task force in place to regularize the activities of scrap dealers and more public education on management of e-waste.

Finally, there must be regular awareness creation among the populace on the causes and harmful effects of air pollution. Together we can Beat Air Pollution!